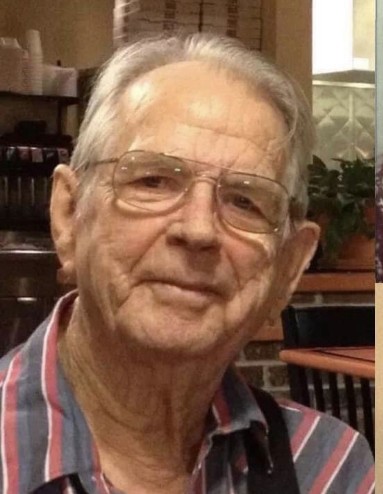 William Eugene “Gene” Lawler, 94, passed away at home on Monday, August 30, 2021, surrounded by his loving family. He was born at the family farm on November 7, 1926, in Ridgway, Illinois, the son of Augustus and Teresa Drone Lawler. Shortly after leaving school at 14, his father passed away and he was left to provide for his mother and seven   sisters. He often hired out and out of necessity, rigged his own tractor with headlights so he could work later. He loved playing in a country band for barn dances and other events.

He was drafted by the U.S. Army in February of 1945, during WWII. He escorted troop trains across the country until receiving orders to the SCU 3990 POW Detachment in Ogden, UT, where he became an MP. He guarded the camp and prisoners, provided escort for POW work details to local fields and orchards, and then served as acting Provost Marshall. At the closure of the camp, he was the last man out, locking the gate for the final time. He also served in the Wyoming State National Guard.

It was there at the POW camp that Gene met the love of his life, Allie Lee Taylor. They were married three months later on January 18, 1946, in Salt Lake City, UT. After his discharge from the army, they lived in Ridgeway, IL, Evanston, WY, and finally settled in Ogden, UT. They celebrated 71 years together before Allie passed away on September 13, 2017.

Gene worked as a mechanic in Evanston, WY, then returned to Ogden to work at the Utah General Depot, the very place he had been a prison guard. He earned his mechanic’s certification from Weber State College and worked at Hill Air Force Base. On the side, he started his own business, “Lawler’s Mobile Tune Up”, fixing cars where they were located. He ran that business for 35 years. Once retired from HAFB, he spent most of his time tending grandchildren, something he treasured.

He has been a member of St. Joseph’s Catholic Church since 1946. He was a Knight of Columbus, and spent 50 years helping Allie with church design, hauling instruments in for special celebrations, and keeping the priests’ cars in working order.

Funeral Mass will be held on Friday, September 10, 2021 at 10 a.m. at St. Joseph Catholic Church, 514 24th Street, Ogden. Friends may visit with family on Thursday from 6 to 8 p.m. with Rosary at 7 p.m. at Lindquist’s Ogden Mortuary, 3408 Washington Blvd. Graveside services will be held on Saturday, September 11, 2021 at the Evanston City Cemetery, Evanston, WY.

The family would like to thank Nicole Schraeder, Melissa Sharp and  Mercedes Cunningham for the loving care provided over the past several years. We would also like to thank South Davis Home, Hospice, interim Healthcare, and In- Home Care Assistance.

To order memorial trees or send flowers to the family in memory of William Lawler, please visit our flower store.