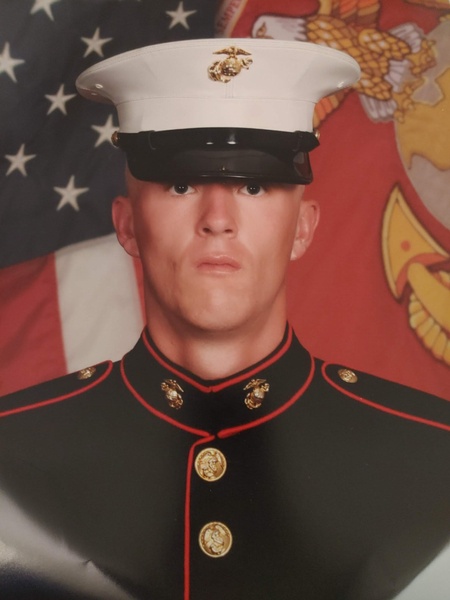 Trenton Chase Franson passed away after sustaining life-threatening injuries in an off-duty accident while serving as a Marine.

He was born September 10, 2000 in Layton, Utah to Ryan B. and DeAnna Sanders Franson.

He was raised and educated in West Haven, graduating from Fremont High School in 2019.  He graduated with his CTE cords.  He loved his automotive and shop classes.  He was a TA in his welding class during his Senior year.  Trenton also enjoyed running (track and cross country) in high school.

His hobbies included drag racing, learning about and working on cars (he particularly loved working on cars alongside his grandpa).  He enjoyed learning and practicing welding and worked briefly for a Steele Erection company after graduation before leaving for the military.

Trenton joined the U.S. Marine Corps on September 9, 2019, and was currently serving as a Corporal in Okinawa, Japan. Trenton was a beloved member of the 9th Engineer Support Battalion and will be dearly missed.

Trenton is survived by his parents, Ryan and DeAnna, two brothers, Ryle, Kaydon and one sister, Harley, his fiancé, Koya, grandparents, Alton R. Sanders, Peggy Sanders and Victoria Halbert. He was preceded in death by his grandparents, Sheldon and Barbara Franson, an uncle, Scott Franson, and a great uncle, Merle Halbert.

To order memorial trees or send flowers to the family in memory of Trenton Chase Franson, please visit our flower store.