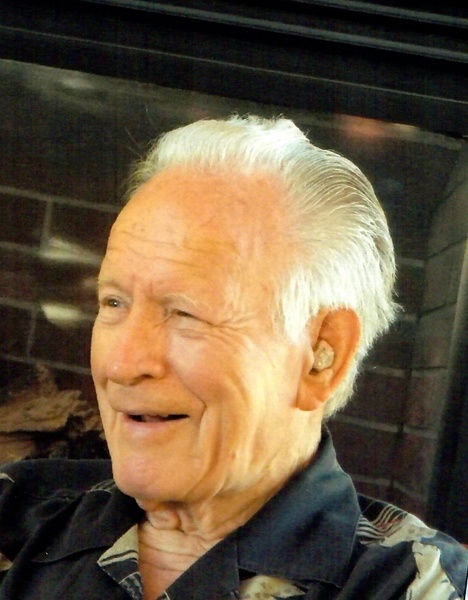 Thomas (Tom) J. Miller, 91, of Ogden, Utah died at home with family by his side on March 4, 2022 after suffering from Parkinson’s Disease for more than twenty years. He is survived by his loving wife of sixty-six years; DaLane Ryan Miller, his six children, Jeff (Miriam), Michelle (Vaughn), Allen (Erika), Chris (Darcy), Melanie (Darrin), and Mandy (Michael), his twenty-five grandchildren, and twenty-two great grandchildren with one on the way. All of Tom’s siblings, Al, Bill, Ned, and Corene McLeod as well as his parents and grandson Carter have preceded him in death and welcomed him to his eternal home.

Tom was born November 3, 1930 in his humble log cabin home (which still stands today and known to his family as “Tom’s Cabin”) in Huntington, Utah to Elmer Delbert (Deb) Miller and Clarcie Jean Gardner. He was the fourth of five children. Among the many lessons Tom learned as a child, hard work and honesty prevail. Since Tom’s dad died when he was two, finding ways to earn money was crucial. While selling newspapers as a boy, Tom had the idea of charging a dime instead of the required nickel to a gentleman wanting to purchase a paper. The man paid the dime. When Tom arrived home and told his mother of his accelerated commission, she took him by the ear and walked him straight back to the man to apologize and give back his five cents. In addition to selling papers, Tom collected bottles, shined shoes, pumped gas, and he and his brothers ran the “Town Herd,” where they would take the neighbors cows out to roam the hills for a dollar a month. Owing to his hard work and honesty, Tom was often sought after as a dedicated employee and never lacked for work. Putting his talents to use, Tom became a salesman for many years selling everything from vacuums to insurance. Eventually, he became a successful contractor and realtor, owning Miller Realty and Homestead Realtors. During his career Tom served on the local real estate board for years and President of the Utah State Board of Realtors for a time. Tom’s priority as a contractor/realtor was to save others the most money possible and was working with this in mind even to his last days. One main goal of Tom’s was to build each of his six children a home before he died. He accomplished this selfless goal.

God, Family, and Country were priorities that Tom lived by. Soon after arriving home from honorably and willingly serving in the Korean War as a Tank Commander, he met DaLane Ryan through a blind date to see the movie “Singing In the Rain” at the Center Theater in Salt Lake City where they both lived at the time. Through their courtship, DaLane was most impressed by how lovingly he treated his mother and sister. They were married on June 24, 1955. Later they were sealed to each other and their children in the Temple of the Church of Jesus Christ of Latter-Day-Saints. Tom served as scout master, executive secretary, and in the Bishopric of the Ogden Sixty-first Ward, among other callings in the church. Serving on Temple Square as host missionaries, a mission in Laie, Hawaii at the Polynesian Cultural Center (PCC), and as missionaries in the Church office building in the Real Estate Department were highlights of Tom and DaLane’s life. Here they were touched by many lives who have become forever friends. Beyond official callings, Tom regularly watched for opportunities to lend a hand to those in need such as the homeless and those suffering with addiction, often by offering jobs or other ways to help. The Miller’s door was always open and their home was often filled with visitors who left feeling loved and cared for.

Time spent with family has made for unforgettable memories with Tom. As the children were growing up, Tom wanted his own children to learn to work hard as well and had them helping out in construction or his office in some way. Finding time for other hobbies, Tom enjoyed deer hunting each fall with his sons and taking fishing trips especially to Alaska. For the past several summers, he was able to spend time with his posterity at the “Miller Times” reunion in Bear Lake and would even participate in the highly competitive road rally race. He was always up for any kind of good fun. We are forever grateful for the love and memories. He is loved and missed, and he will always be remembered.

Words cannot express the amount of gratitude and thankfulness we feel towards each of the amazing caregivers at Applegate Home Care and Hospice who so lovingly took care of our husband, father, and grandfather. We are forever grateful for you and will never forget your unconditional service.

In lieu of flowers please consider donating to The Church of Jesus Christ of Latter-Day-Saints Humanitarian Fund: https://philanthropies.churchofjesuschrist.org/humanitarian-services.

To order memorial trees or send flowers to the family in memory of Thomas "Tom" J. Miller, please visit our flower store.