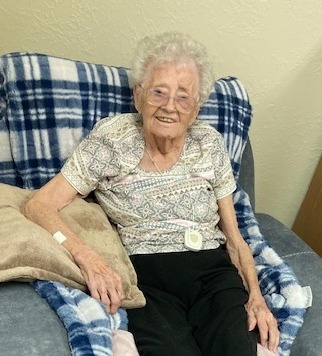 Shirley Lee (Jackson) Porter passed away Sunday, July 10, 2022, of natural causes with some of her family present at Apple Village. Shirley was born on April 10, 1925, to Henry and Anna (Mills) Jackson in Detroit, Michigan.

Her first job was working on the family farm. The rest of her sisters helped with chores inside the house. Shirley was 14 when she started driving the tractor, milking the cows, and taking care of all the other animals. After graduation from High School, she moved and bought her own house at the age of 17. She volunteered at a hospital as a nurse’s assistant. When World War II started, she went to work in a factory on an assembly line. We used to tease her that she was “Shirley the Riveter”.

She met the love of her life, Nathan D. Porter at a baseball game. He was dressed in his military clothes as he was in the Air Force. It was love at first sight and when he came back to a second game, they knew that they needed to be together. They were married on April 22, 1946, in Toole, Utah. They traveled a lot for his military assignments in Maine, Florida, Arizona and Texas. After his retirement, they moved to Fruit Heights where they lived in many years. Shirley worked at the Ding Ho restaurant in downtown Salt Lake City for 30 years. She became the Manager and ran the business for the grateful owners.

She loved to fish and hunt with her husband as she was better at scaring out the ducks than any dog. More than anything she loved to garden. She always had the most beautiful yard. After her husband passed away, Shirley lived alone and as she aged, she began to fall in her house and yard which caused injuries. Her niece and nephew, Margene and Randy Wing moved her into their home in Layton and “adopted” her into their family. She was baptized into the Church of Jesus Christ of Latter-day Saints on May 8, 2021. Many people came to the baptism because they loved her and had never seen a 96-year-old get baptized.

She is preceded in death by her husband Nathan, mother Anna, in-laws Nathan Edward and Violet (Heggie) Porter. Shirley also had four sisters that passed before her.

To order memorial trees or send flowers to the family in memory of Shirley Lee (Jackson) Porter, please visit our flower store.