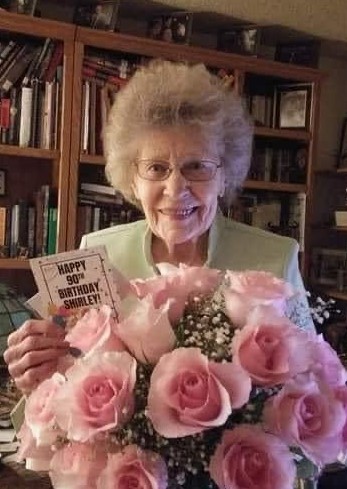 Shirley Wheeler Park passed away Saturday May 14, 2022 due to complications from a stroke she suffered on February 10, 2022. She was born January 16, 1931 to Frederick Arthur Wheeler and Lizzie Mae Marshall Wheeler at her parents’ home in Salt Lake City, the second of three daughters. Shirley’s life took her to California, Arizona, Nevada, and back to Utah.

Shirley’s family moved in 1934 to an apartment above the Farmers Union Store in Layton where they lived for 18 years. Her father was a chemist at the flour mill, and eventually started his own business, Wheeler Feed Co., on the Main Street. Theatre was an important part of Shirley’s life. In the summer of 1947, while still in high school, Shirley received a drama scholarship with Northwestern University in Evanston, Illinois. Shirley graduated from Davis High School in 1948. In the 1948-1949 she attended BYU on a Drama Scholarship, where she met and eventually married Roland Vance, her first husband. They later divorced.

Shirley was back in Utah in 1972, where she got a job working at the Davis County Courthouse. Within 5 years she was clerk of Court in the Layton Court, serving the court system for 20 years.

As an active member of the Church of Jesus Christ of Latter-Day Saints, she held many calling’s, including Relief Society President, and she was always happy to do whatever was asked. Her favorite calling was one that allowed her to provide services to those in need. Shirley spent countless hours helping the young women in the area to recover from trauma and go on to live happy, productive lives. Shirley’s volunteer work in the community included helping with elections. An avid reader, she was a member of a Belletristic Book Club, and was particularly interested in anything regarding human behavior. Family history was very important to her and she loved genealogy work.

Shirley loved to travel. When asked what her favorite trips were, she replied, “Egypt,” because of the church history, and Hawaii, “Because it was my first time to a ‘foreign’ area and it was wildly exciting! Her trips included a tour of Europe in 1970; Mexico; the British Isles; Ireland; Scotland; the Caribbean; the Panama Canal; Costa Rica; and last summer a cruise to Italy, in her 91st year.

Shirley was an excellent baker. We loved her homemade bread; and her gingerbread house kits for our annual Christmas parties. Thanksgivings will not be the same without her outstanding pumpkin pie. She loved to sew, particularly beautiful and treasured doll clothes for her kids and grandkids’ dolls.

On June 24, 1980 Shirley was sealed to her eternal husband John Milton Park in the Ogden Temple. They made the most of their 5 short years together traveling and studying the gospel together. John loved his sheep and to the end of her life she kept close reminders of his sheep which always put a smile on her face. In 2012 Shirley was united with an old sweetheart she had met while working at Lagoon when she was just 16 years old. She married Roy Hatch in Manti, Utah. Roy passed away in 2016.

Shirley is preceded in death by her parents, her husband John Milton Park, and son Kimball Roland Vance.

Services will be live streamed by going to www.lindquistmortuary.com and scrolling to the bottom of Shirley’s obituary page.

To order memorial trees or send flowers to the family in memory of Shirley Wheeler Park, please visit our flower store.