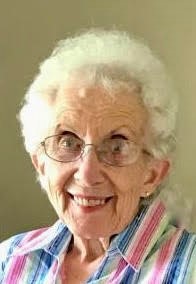 Shirley Mae Sykes Maughan, our sweet mother, completed her mortal mission and passed peacefully surrounded by her loved ones, in the afternoon on Feb. 16, 2022, in West Haven, UT. She was loved and adored by all who knew her. Her sweet voice, silly giggles, and joyful attitude toward life made everyone smile and happy.

Shirley was born in Park City, Utah, April 16, 1930, to George Russell Sykes and Luella Young. She was the first born of three children, followed by her younger brothers Wesley Sykes and William Sykes. The family later moved to Layton, Utah, in 1943, where Shirley attended and graduated from Davis High School May 21, 1948. After high school she moved with her family to American Fork, UT. During high school her favorite subjects were home living and girl’s chorus. She met a certain fast driving, soft-spoken, dark-haired gentlemen who everyone called Charlie. She caught his eye too. One thing led to another, and she married Charles Leth Maughan in the Salt Lake City LDS Temple on Jan. 11, 1951, for all time and eternity. They settled in Layton, UT and were blessed with five children, three sons and two daughters. Shirley excelled at being the quintessential wife and mother. She was content to stay home and raise her children while Charles worked. In 1972 the family moved to Monteview, Idaho after purchasing a small grocery store. Shirley ran the cash register and worked right alongside her husband. They did well but had to sell the store due to Charles’ poor health and eventually moved back to Utah in 1978 to Clearfield. Shirley worked part time at Chandler’s Drug and later at The Canned Food Store, both in Clearfield. In 1979, they moved back to Layton, to their first home. Charles passed away in 2013, but Shirley remained there until November 2019. She then moved to Lotus Park Assisted Living facility in West Haven until her death.

Shirley was very active in her church callings, serving in various capacities in Primary and Relief Society. She loved her children, grandchildren, extended family and friends fiercely, always being very concerned for their welfare. She had a very strong testimony of our Savior, Jesus Christ, and always demonstrated this through her service and exemplary attitude and works.

Shirley loved to read and listen to music. She especially liked listening to Charles play the piano each evening, tapping her toes to the rhythm. She loved Charles with all her heart and looked to him for guidance on all things. She couldn’t wait to see him again after his death in 2013.

The family would like to sincerely thank the staff at Lotus Park Assisted Living, A1 Hospice, and Suzy’s Senior Companionship for the care, service, and love given to our sweet mother these last few years.

Services will be live-streamed and may be viewed at www.lindquistmortuary.com by scrolling to the bottom of Shirley's obituary page.

To order memorial trees or send flowers to the family in memory of Shirley Maughan, please visit our flower store.