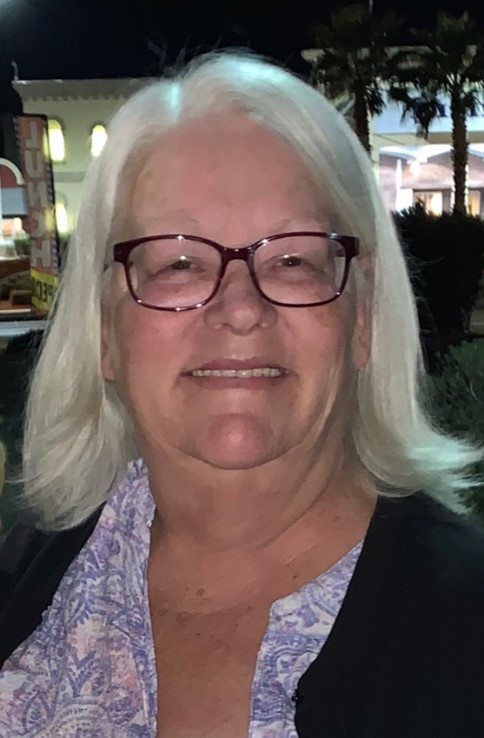 Sharon Gail Arndt Hinson, 68, of Clearfield, Utah, was peacefully taken into our Lords arms and heavenly family the evening on May 21, 2022. She passed away as beautiful as shelived life, with love and laughter surrounded by family.

Sharon was born in Bangor, Maine on December 22, 1953, to Gale William Arndt and DorothyJean Beck. She was the first born of 2 sisters and 2 brothers. Sharon was a preemie baby, so small she was swaddled and cradled in a dresser drawer her first three months of life and

gradually introduced to a baby bassinet.

Sharon spent her early years living in Suffolk, England and the US regions of New England, Midwest, and the Southwest. Sharon’s family moved from Fort Worth, Texas to Clearfield, Utah, where she attended Jr.High and High school and Graduated at Clearfield .

After meeting a young US Air Force Airman, Sharon married her first husband Dave Perini in 1973 and later moved to the Pacific Coastal area of Oregon. Her Sons Eric and Adam, were her “never ending pride.” Sharon later divorce and married the “love of her life” Eldon Oldham in

1984 spending the “best 7 years” together. After his death, Sharon later met and married, Marty Hinson and together they relocated to California to have many adventurous travels and Experiences.  Followed by the death of Marty, Sharon returned to Layton, Utah. She spent time

with her family and friends, attended many social events and prepared many of her famous dishes, in addition to helping care for her mother and father until their passing.

Her retirement in 2017 led her to relocate to Mesquite, Nevada where she made many new friends with new adventures. Sharon decided to spend her last days with her family and moved to Clearfield, Utah in 2021.

her special flower is Begonias, symbolic of her uniqueness.

Sharon was caring, compassionate and sometimes domineering with her strong opinions. She had a unique ability to know what to use for someone’s healing and comfort or a substitute for an ingredient for a particular dish.

She overcame many obstacles in her life and was very generous with her time and energy to help others. While being confident and courageous, she did not let her diagnoses of diabetes and cancer shape or control her life. She rose above the pain and suffering dignified with love,

Sharon was wrapped in love by her family’s care and help during her illness while they each provided kindness and concern to ensure her well-being. Special Thank-you to Bess and Calvin for their extraordinary patience and care, A heartfelt thank you to the Doctors and Nurses at the

Huntsman Cancer Institute and the University Of Utah Hospital.

To all that had the privilege to know her, Sharon walked home to her heavenly family and will be deeply missed by her surviving family members; sons, Eric (Annette) Perini and Adam(Tina) Perini. brother, Dick (Amber) Arndt, sisters, Bess (Calvin) Kendell, Lori Snegirev (Neil

Creer), and sister-in-law, Cindy Arndt. Grandchildren-7, Great Grandchildren- 3, and one on theway. Many loving nieces and nephews. She was preceded in death by her 2 husbands, father,Gale William Arndt, mother, Dorothy Jean Arndt, and brother, Steve Edward Arndt.

To order memorial trees or send flowers to the family in memory of Sharon Gail Arndt Hinson, please visit our flower store.