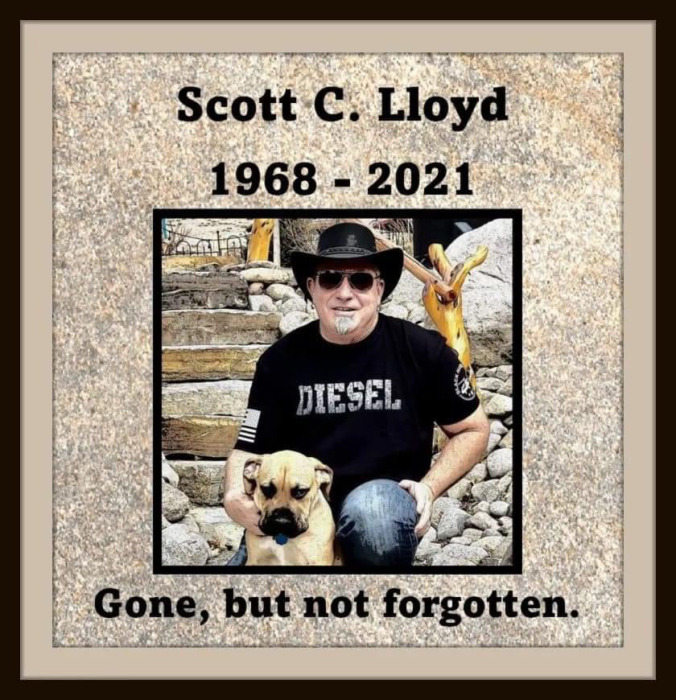 Scott Curtis Lloyd passed away on Tuesday, September 14, 2021 at the age of 53 due to complications with his recovery from Covid-19.

Scott lived a life of extremes, subscribing to the philosophy of “throttle therapy”. This applied to every aspect of his life. He worked hard, he played hard. He was the personification of lone-wolf biker, fiercely independent until the end. He had a lightning wit, a sarcastic sass and a stream of dad jokes and puns for every occasion. He enjoyed anything with a lot of horsepower and speed, especially off-road. During the winter months he would really shine, as he was better on a pair of skis than he was on his own two feet. He enjoyed the outdoors; hunting, camping, archery, shooting, playing at the lake or out in the desert with his high- octane toys. When he wasn’t out in nature, he found contentment in his meticulously cared for backyard, lovingly tending to his grill and his smoker. Known as “Grandpa Jungle-gym,” his grandchildren were content in the yard with their grandpa, surrounded by his garden of gnomes.

As a budding local grill legend, Scott was proud of his skills with backyard cuisine. He demanded perfection in his cooking, even if it meant dinner wasn’t served until two in the morning. His grill station was always cared for and well stocked with multiple varieties of charcoal.

Scott pretended to be a hardened biker “tough guy”, but everyone who knew him saw straight through it. He was the person who would be at anyone’s side with just a phone call; the type of person who would pause everything to help a person in trouble. He was dependable, he was loyal, he was a protector. He was a meticulous planner with back-ups and contingencies and ten of anything he needed for any occasion.

Believing in the value of hard work, Scott joined the working world at a young age. As he was dipping his toes into adult life, he met his wife, Stacy. The two fell in love and they got married on November 28, 1988. Scott adopting her son, Mathew, as his own. After working a few jobs, including a stint at the salt mines, and moving from his home in Utah to Vallejo, California, Scott hired onto the signal department at the Southern Pacific Railroad in 1989. He transferred to the Colton, CA train yard and worked there for a number of years before signing on as a locomotive engineer. Around this time, he had two daughters, Taylor and Brooke. He transferred to the Union Pacific train yard in Sparks, NV in 1999. Reno and Sparks become his home. Here he continued to work and established a fun filled life with his children and grandchildren.

Scott is survived by his wife, Stacy Lloyd; his children, Mathew, Taylor, Brooke, Leona and his biggest and most spoiled child, Diesel Turbomax Lloyd; his parents, Kurt and Carey Lloyd; his sibling Brandon and Sarah; his in-laws, Wayne and Roxanne Twarry; his niece and nephew, Brittney, Brayden and Triston; his grandchildren; Seth, Kael, Brea, Peyton, and Elijah; his daughter in- law Cherish Lloyd and son in- law Trevor Hampshire; scores of friends and his railroad family.

Scott had a giant heart, making an impact on everyone he met in his tragically short time on this earth. He will be missed by us all. We can only imagine the love of our Savior as Scott rode through Heaven’s Gate on his Harley into the loving arms of our Heavenly Father.

Rest well Scott, you will be forever missed.

In lieu of flowers please donate to the Down Syndrome Network at: www.dsnnn.org in  Scott’s name.

To order memorial trees or send flowers to the family in memory of Scott Lloyd, please visit our flower store.