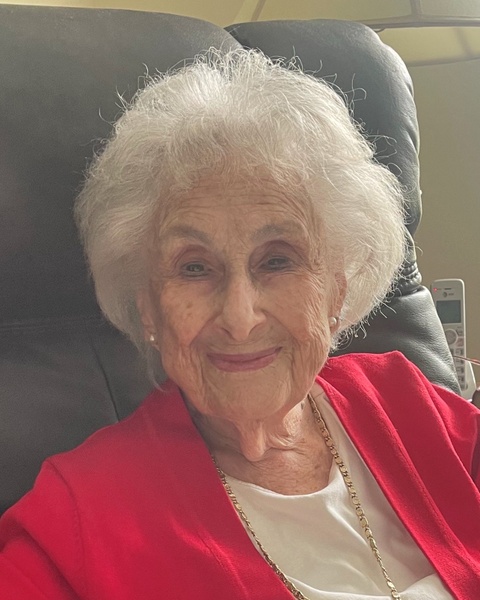 So dawn goes down to day. Nothing gold can stay. While Robert Frost may be correct, Ruth Elaine Williams Pledger dared to challenge this sentiment by giving it a go for more than a century. Surrounded by family, Ruth passed away peacefully on the morning of September 30, 2022, at the golden age of 105.

Ruth’s talents, experiences, and influence were equally expansive. She spent her early years primarily in Utah and California, often reminiscing about her time near the coast in Los Angeles, peering through her window at her neighbor being visited by a movie star or strolling up and down Hollywood Boulevard. She married her first husband, Virgil “Bud” Kirkwood in 1938, and would spend early married life in Southern California. One of the most impactful experiences of her life was in early 1942, pregnant with her first child and writing letters crouched over a candle during an air-raid blackout, weeks removed from the bombing in of Pearl Harbor. What would become quintessential characteristics, Ruth endured this and many subsequent trials with grace and unwavering optimism.

Ruth and Bud were parents to two children before separating. Ruth then met her soulmate, Harry Pledger, whom she married in the Salt Lake Temple on March 18, 1949. They would spend the next 68 years together, raising seven children, following work and opportunities throughout Utah and the Intermountain West, then travel the entire country, visiting all 50 states together. They traveled across the globe, as well, marching across Europe more than once, and even gracing the storied Russian streets of Saint Petersburg and Moscow. In their later years, they split time between Utah and El Paso, Texas, before finally settling for good in their familiar hometown of Ogden. Harry passed away on October 18, 2017, and had to wait patiently for nearly five more years for his beloved Ruth. Their reunion has been undoubtedly sweet and serene.

Ruth’s hands were never idle, as there was always a puzzle to be solved, a card game to be played (and usually won), a scrapbook to be organized, a sprawling garden to tend or an object to be crocheted when life’s demands gave her the time. In addition to raising seven children, those demands included working various jobs to help provide for her family: she worked for the Union Pacific Railroad in Yellowstone, Montana and Sun Valley, Idaho; the U.S. Postal Service in Kaysville; Hill Air Force Base as a payroll clerk; and the IRS, from which she would retire in the 1984. Ruth also served in many roles as an active member of The Church of Jesus Christ of Latter-day Saints.

Above all else, Ruth cherished her family. Her children, grandchildren, great-grandchildren, and even great-great-grandchildren were her life. Her posterity could look forward to a thoughtful card on a birthday, an event Ruth tracked so carefully for so long. She was always quick with a smile and encouraging word, ever-ready to lift others’ spirit with her infectious charm and positivity.

Ruth’s mind was as sharp as her wit until the end. Her virtuous influence has spanned generations and she will be sorely missed. The memory of her golden glow will always endure.

Ruth is reunited with those who preceded her in death: her parents, her husband, Harry; her daughter, Kathy Park; her daughter-in-law, Dixie (Stephen) Jackson Kirkwood; her siblings, Frank Williams, Donald Ray Williams; and Jean Still; her step-mother, Alta Williams Hyer; and stepsons, Leo Pledger and Dean Pledger.

The family appreciates and thanks the care given to our Mom by Quail Meadow Assisted Living and Bristol Hospice.

Services will be live-streamed and available the day of the services by scrolling to the bottom of Ruth’s obituary page at: www.lindquistmortuary.com, where condolences may also be shared.

To order memorial trees or send flowers to the family in memory of Ruth Elaine Williams Pledger, please visit our flower store.