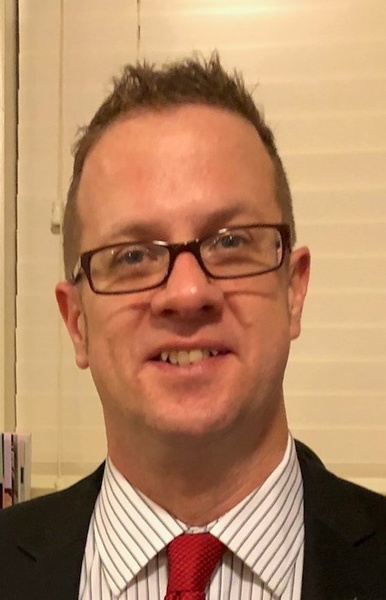 On the evening of March 20, 2022, Russell (Rusty) Brent Petersen, completed his mortal mission and passed through the veil after a four-year battle with cancer. He was just 50 years old.

Rusty was born on October 11, 1971, to goodly parents, Ronald L. and Charlene Petersen in Layton, Utah. He was the youngest of seven children. Rusty endured many trials in life, the first was brain surgery at just six weeks old. He had many interests and talents, one of them being a love of drama and musical theater, which he inherited from his father. Rusty graduated from Layton High School in 1989, and was soon on his own, learning many of life’s lessons through the school of experience.

On a lark, at the age of 21, Rusty made his way to the Portland, Oregon area, which became his home for 28 years. He loved the climate, the culture, and especially the people.

Rusty learned the value of hard work from his parents. He began his career as a CNA, worked his way up in human resources, and eventually found employment with ADP, where he worked for 18 years. Before Rusty’s health issues forced him to take a leave of absence, he was employed as a Senior Project Manager. He was well liked and well respected. Rusty taught his associates the value of teamwork: great results are the product of great relationships. He was an excellent provider for his family.

Rusty had many hobbies; his favorite was his ability to cook and grill. He entertained many who loved both his cooking and conversation. The missionaries of the Church of Jesus Christ of Latter-day Saints in the Clackamas area were regular and grateful recipients of his culinary offerings.

Rusty married Becky Mees in 2004, and although they later divorced, from that union came his beautiful daughters, Anabel and Elsa. They were the light of his life. Rusty diligently taught his daughters to love their Heavenly Father and Savior Jesus Christ, and to extend love, kindness, and respect to others. Everything he did, he did for them. His sacrifices included undergoing multiple surgeries and rounds of chemo and radiation--all to extend his time with his girls. He loves them deeply and is anxiously awaiting the day they will be reunited.

Four years ago, Rusty made the deliberate choice to make serious changes in his life and to follow the teachings of the gospel of Jesus Christ. He loved his ward family, serving the youth, and especially loved watching his young daughters begin developing testimonies of their own. Prior to his passing, he served in the bishopric of the Clackamus, Oregon Ward.

Rusty was preceded in death by his infant daughter, Louise; parents, Ronald and Charlene Petersen; and two brothers, Doug and Mark, who also passed away too early due to cancer. He is survived by his beloved daughters Anabel and Elsa Petersen, and his siblings David (Raylene), DeAnn (David), Scott (Marilyn), and Renee (Steve). He is also survived by sisters-in-law Becky Petersen and Brenda Petersen.

Rusty’s family would like to thank his Clackamus Ward family for all their love, support, and service, especially Bishop Tyler Hornibrook, Nick Browne, and Kristinya Birch. We’d also like to express our gratitude to Andrea and Andrew of CNS Hospice, for their dedicated and sensitive care of Rusty.

Rusty is now serving the mission he had hoped and planned for after his retirement.

Services will be live streamed and may be viewed at www.lindquistmortuary.com by scrolling to the bottom of Russell's obituary page.

To order memorial trees or send flowers to the family in memory of Russell Brent Petersen, please visit our flower store.