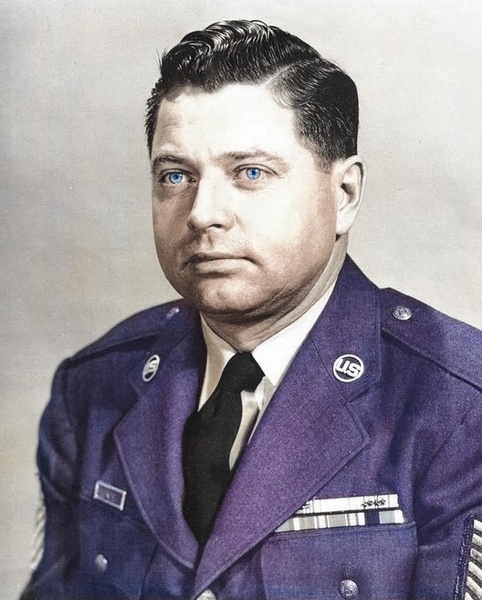 Reuben Lawrence (Sarge) Eubanks passed peacefully surrounded by people who loved and cared for him on December 29, 2021, in Peoria, Arizona, at the mighty age of 101.

In October 1961, Reuben married Maxene Pickett Harris of Spickard, Missouri, in Evanston, Wyoming. He was married to his loving wife for 52 years.

Prior to America’s direct involvement in World War II, Reuben left the CCC to join the Army Air Corps in mid-1941 and trained as a radio mechanic.  During the war, he was sent to the Pacific theater and assigned to a fighter squadron in Australia.  Later on, he served with the Philippine Occupation Forces.

After the war, Reuben was stationed in Germany, Turkey, Korea and Vietnam.  His last duty station before retiring in 1961 was Hill Air Force Base in Ogden, Utah, where he met Maxene.

After retiring from the military, Reuben started a new career at Boeing Aircraft Company when the company asked him to join as a consultant in the Minuteman Intercontinental Ballistic Missile program at Hill Air Force Base.  Reuben’s Boeing career was cut short in 1978 when he contracted Guillian-Barre Syndrome and nearly lost his life.  It took over two years of recovery to regain 80 percent of his mobility.

In 1988, Reuben and Maxene moved to Sun City West, AZ, where they enjoyed their remaining days.

Reuben did not; however, retire from giving back to his community. Working side-by-side with Maxene, they participated in charity programs to help the disadvantaged members of their community.

Reuben belonged to two philanthropic organizations in Phoenix.  He was a 32° member of the Masonic Temple, as well as a member of the El Zaribah Shriners (charter #1896).

In recognition of his 100th birthday and his 20 years of military service, Reuben received a Letter of Tremendous Achievement and Thanks from the late United States Senator John McCain.

In lieu of flowers, the family requests donations be made in the name of Reuben L. Eubanks to either the Shriners Burn Hospitals for Children, or the National Alzheimer’s Research Center in your area.  Thank You, the Eubanks Family.

To order memorial trees or send flowers to the family in memory of Rueben Lawrence (Sarge) Eubanks, please visit our flower store.