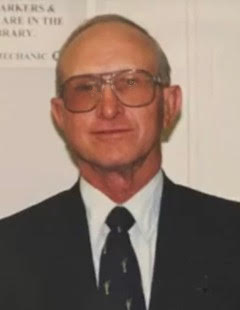 Royal J. Rigby, age 92, passed away peacefully on December 18, 2021, in Layton, Utah, surrounded by loved ones. He was born in Alta, Wyoming, on September 19, 1929, the fourth of seven children, to Elmer Eckersley Rigby and. Myrl Amanda Dabell Rigby. Royal is now reunited with his eternal companion, Francies McRae Rigby, passing away on their 69th wedding anniversary.

Royal was preceded in death by his parents, his wife Francies, brothers Max, Ken, and Alfred Rigby, sisters Ruth Olson and Lucille Stevens, sisters-in-law Evelyn Rigby, Sondra Rigby, and brothers-in-law Cal Olson, Leo Stevens, and Norlan Walker. He is survived only by a sister, Sheron Walker, of Kaysville, UT.

Royal was a devoted husband and father, and he and Francies raised their family on a small farm, complete with cows, pigs, rabbits, chickens, horses, and a large garden. They also opened their home to at least 15 other individuals who lived with the family for several months to years.

Royal loved waterskiing and fishing with family and friends, gardening, and working in his woodshop, where he made hundreds of toys, birdhouses, Christmas gifts, wedding plaques and additional items, and most often for others. Royal spent his life devoted to the service of God and his fellowman, always striving to help others in any capacity.

Royal served in the army during the Korean war. He also earned his undergraduate degree in vocational agriculture from the University of Arizona, becoming an elementary educator, teaching school for over 25 years.

Royal was an active member of the Church of Jesus Christ of Latter-day Saints. He served a mission in New Zealand, and often spoke of his incredible love for the Maori people. He served valiantly in every capacity in his church callings, including as a ward missionary, teacher, and a scout leader for over twenty years. Royal took his calling as a scout leader very seriously, advancing many young men through the ranks of scouting. He organized weekly meetings, planning monthly camping trips with dozens of boys, and helped them develop into young men who were prepared for life and had strong testimonies of the gospel of Jesus Christ. He and Francies served four couple missions together – one in Tonga, two in Mexico, and one in Martin’s Cove, Wyoming.

To order memorial trees or send flowers to the family in memory of Royal Rigby, please visit our flower store.