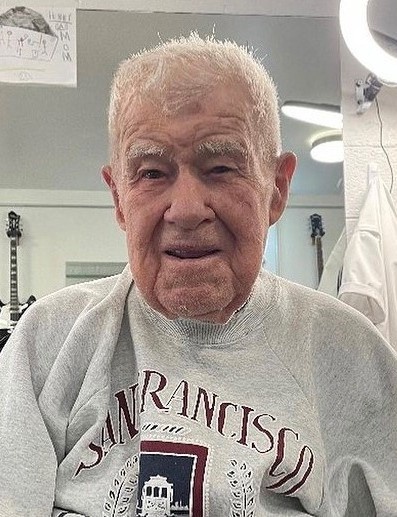 Our dad had once said he and mom were “sandbox buddies” as their parents were friends and they knew each other since they were toddlers. Dad passed away peacefully at his home surrounded with love and memories and finally gets to reunite with his “sandbox buddy”, childhood friend, high school sweetheart, and loving wife of 71 years, Mary Louise Bagstad Olofson who preceded him in death on January 28, 2014. The spark never went out, in his 60’s, Dad lost the tip of his thumb as he was working on his truck with his grandson, Jeremy, and would always joke with the grandkids saying that he was no longer able to pinch grandma’s butt anymore.

Dad served in the United States Army as a Paratrooper with the 711th Airborne Division, completing 148 jumps. He worked as a Heavy-Equipment Operator and was a proud Union Member with Operating Engineers Local #3. He was part of building most roads in and around the State of Utah. Upon retirement he took up ice fishing, continued hunting and taking adventures, several times alone, well into his early 90’s, oh the stories we could tell. He also took up restoring old 1940 to 1950 Farmall, John Deere, and even a Massey Ferguson Tractor to mint condition. Each of us four daughters had our own tractor and enjoyed riding them in several 4th of July Parades. He was a member of the Great Basin Tractor Club and showcased them at county fairs.  Most people, in Plain City and around, knew him as “The Tractor Guy”.

He raised us six kids to enjoy nature, the great outdoors, and camping, which were always one of our biggest joys.

Our family will hold a private celebration and wish to thank his amazing neighbors who helped him, checked on him, fed him, removed snow, closed his garage, and so many small things that meant so much. We would like to thank Applegate Home Health Care and Hospice for allowing him the comfort of staying home on his final journey and a special thank you to his private nurse, Sam Greer, who made his days brighter and brought the light back in his eyes up until his final moments.

He truly lived a life full of joy, adventure, love, family, friends, hard work and will forever bring a smile to those of us lucky enough to have known him.

To order memorial trees or send flowers to the family in memory of Robert Olofson, please visit our flower store.