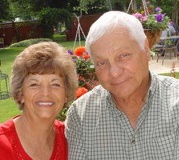 Robert E. Parks, 85, passed away peacefully at home and surrounded by family on Wednesday, November 10, 2021.

He was born on April 29, 1936 in Pueblo, Colorado to George and Frances Parks.

Robert grew up in the Pueblo and Fort Collins areas, then he moved to Utah where he lived in Clearfield and Clinton.  He graduated from Davis High School in 1955 and enlisted in the Navy Reserve shortly thereafter.

He married the love of his life, Cheryl Barlow on June 21, 1957.  They had three children who were the center of Robert's world.  Robert had many hobbies, but golfing, which he and Cheryl had a shared love for, was one of his favorites.  During their 55-year marriage, Robert and Cheryl were always together.  They built a new home on a golf course to enjoy with each other during their golden years.

Robert was a devoted husband and father who always put his family first. He worked for Hill Air Force Base for forty years as a data automation computer specialist, and he made many life-long friendships during his career. In addition to golf, Robert loved camping, boating, horses, classic cars and trucks, wood working, paragliding, duck hunting, and spending time outdoors with family and friends.  He also enjoyed his time as a youth football coach.

He was preceded in death by his wife Cheryl, daughter Jackie (Kent) Dahl, brother Jim Parks, and parents George and Frances Parks.

To order memorial trees or send flowers to the family in memory of Robert Parks, please visit our flower store.