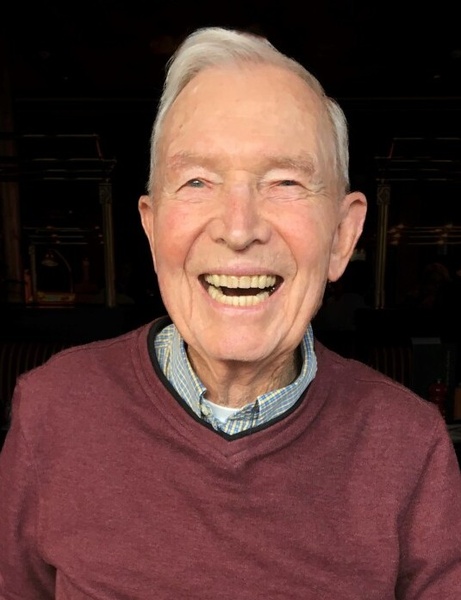 While the bread pudding was being prepared, Bob peacefully left this life 14 hours, 29 minutes, and 15 seconds short of his 99th birthday.

Robert was born January 15, 1923, in Los Angeles, California to Jonathan Alonzo and Mina Jones Wallace. His childhood was spent in Exeter, California with his younger brother Richard whom he nicknamed Jerry. He attended Exeter High School, Visalia Junior College, Stanford University, International University of New York, and finally the University of Geneva, Switzerland where he received his PhD in Art History.

WWII interrupted his schooling where he was a Sergeant in General Patton’s 3rd Army. He was awarded a Bronze Star for meritorious achievement in ground operations against the enemy, European Theater of Operations, during the Central Europe Campaign. He was part of the liberating forces in France and Germany. During a return trip to Passau, Germany in 2014 he was so pleased to see the beautiful vibrant city and surroundings which he had only marched through at night during the war.

Upon completing his graduate degree, he taught in France for a year before returning to the States where he pursued his dream of teaching at a university and winning Ginger Ellis’s heart. In 1957 he married his sweetheart, started a family, and began his 30-year career at San Diego State University. He was a beloved professor of Art History who shared his passion of art and architecture with his students. But he was more than a teacher; from zooming lectures to exploring cultures throughout the world, his joie de vivre was always admired. Wherever he traveled, he was a tour guide extraordinaire, appreciated by all. Though he completed his international travel at age 95 in Norway, he was not finished. He never stopped learning.

Summers were initiated by driving the young family in an overloaded blue Oldsmobile station wagon to Fish Haven, Idaho where time was spent cultivating his expansive vegetable garden, sailing and capsizing on the lake, reading on the pier, water fighting after dinner, stuffing 15 kids in the same car for the Paris Movie Theater (not always returning with the correct number), to playing nightly games of scrabble with Mom and his fellow “out-laws” er in-laws.  His lemon ice cream, weekend waffle extravaganzas and his incomparable, sometimes incomprehensible Anniversary Party costumes will be dearly missed.

Art and Culture were a central focus in his life. He was involved in San Diego with the Asian Art Council at the SDMFA, Friends of Classics, Friend’s of Love Library, Committee of 100, founding member of Point Loma Village Beautiful, and numerous other museums and organizations. He enjoyed the privilege of being the auxiliary to the Wednesday Club. He also appreciated a variety of music, especially symphonies and operas, often singing the whole way home. In 2007 the Friends of Balboa Park honored Bob and Ginger with the Millennium Award for fifty years of dedicated service to the park.

After retirement, Robert attended Utah State University and became a prolific potter. For thirty-five years he was the sole artisan of the exquisite Fish Haven Executive ACME Pottery Wares. From teapots to his commemorative bowls, and everything in between, his designs and creativity were legendary and exhibited. His legacy in ceramics lives on in many homes.

He was a gracious host and conversationalist, leaving behind exceptional stories, irrepressible singing, his all-encompassing smile, and children, Janet; Matt (Kat Woodard); Sally (Scott Browning) and his grandchildren, Eliza, James and Robert Browning, Jack and Matt Wallace, Kale’a Woodard; nieces, nephews, Ginger’s suspect cousins; many wonderful friends and of course, all the dogs! Preceded in death by his parents, wife, and brother.

Thank you to Glenn and Leicha, ComForCare, and Rocky Mountain Homecare and Hospice, for the loving service they provided to Bob.

A Celebration of Life will be held at a later date. In lieu of flowers, please donate to your favorite charity or give your neighbor a helping hand. Arrangements entrusted to Lindquist’s Ogden Mortuary.

To order memorial trees or send flowers to the family in memory of Robert Wallace, please visit our flower store.