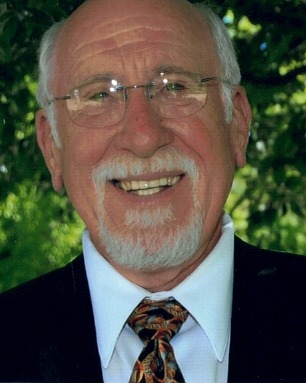 Riley M. Blanscett passed away on December 10, 2022, peacefully at home. He was born March 13, 1940, in Salt Lake City to Melvin and Beulah Blanscett. Riley graduated from Weber High School and furthered his academic career at Weber State College. As a teenager, he was a member of the Salt Kings Rod and Custom Club.

He married his high school sweetheart, Neva Peterson, on September 11, 1958. Their marriage was later solemnized in the Logan LDS Temple. They enjoyed 64 years of marriage. He loved his family.

Riley worked for several years at Mel’s Lockers and then worked for the City of Washington Terrace as a Patrolman and Sergeant. Following that, he served with the Utah Highway Patrol for many years. Riley worked for Remet Corporation in LaMirada, CA for 15 years and then retired in 2002.

Riley was a member of The Church of Jesus Christ of Latter-day Saints and served as Scoutmaster for many years.

He volunteered at the George S. Eccles Dinosaur Park for numerous years and received the Governor’s Silver Bowl Award for his service.

Riley enjoyed coaching baseball and softball. He was always supportive of his son’s sports, activities and games. Riley also enjoyed golfing and target shooting with his sons and was an avid Chicago Bears fan. He always appreciated meeting new people and could talk to anybody. He especially loved to be surrounded by his family. He had endless stories to tell, loved to travel, and also like to read about the Civil War and the wild west.

Funeral services will be held on Saturday, December 17, 2022 at 11 a.m. at Lindquist’s Ogden Mortuary, 3408 Washington Blvd. Friends may visit with family on Saturday from 9:30 to 10:30 a.m. at the mortuary. Interment, Lindquist’s Memorial Gardens of the Wastach, 1718 Combe Rd.

Services will be live-streamed and available the day of the services by scrolling to the bottom of Riley’s obituary page at: www.lindquistmortuary.com, where condolences may also be shared.

To order memorial trees or send flowers to the family in memory of Riley M Blanscett, please visit our flower store.