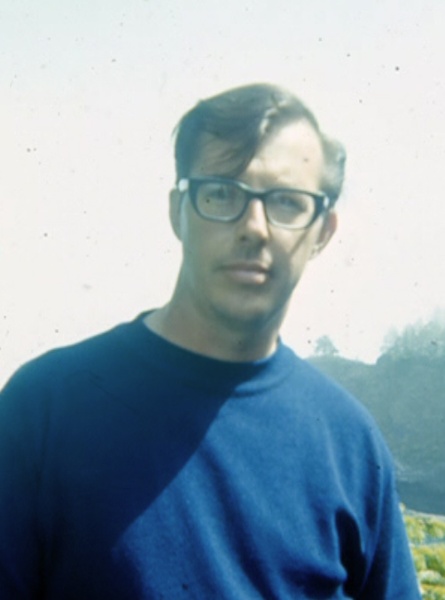 Richard “Dick” Lee Raun left our world on his next adventure, May 12, 2022 at the age of 88. He was born in Portland, Oregon to parents Russell R. Raun of Denmark and Marie Josephine Butzer of France on March 3, 1934.

He married his love, traveling partner and best friend, Sandra Lee Raun on June 17, 1957. Their main purpose was to have fun, laugh and revel in the beauty of this life.  They traveled, camped, fished, played, learned and studied their way through as a couple for many years. They later decided to have their first brilliant and beautiful daughter, Vicki and a second six years later, Kathy, to share in their fun and adventures.

He made his way to Utah by hitching a ride from Portland the day after graduation.  He first worked at a flour mill, then Richardson Battery where he was a union delegate and traveled as a representative. When the battery plant closed, he worked at Hill Field Air Force Base where he was able to travel even more and often took his wife and children along. He would always say “If you are not having fun at your job or traveling for work, you need to find another way to make a living”.

Dick was the best husband, father, friend, uncle, “special” Grandpa and neighbor anyone could ask for. He was quick to help anyone in need, fixed everyone’s sprinklers in the neighborhood, helped with car repairs and was a great listener. Hand him any crying baby and it would immediately calm down in his arms. He went on long walks daily, preferably with a dog, and often took dogs that just looked like they needed a walk. In his younger days, he was a deer hunter but later realized it was actually the camping, companionship of his nephews and watching the animals that was the best part. He never picked up a gun again except to teach his daughters gun safety and target practice with the “Daisy”.

He took his family on trips to the Pacific Ocean regularly where he showed us how to catch razor clams and how to clean and cook them. He was an avid gardener and chef. His specialties were spaghetti sauce with meatballs, French bread, grilled lamb chops with lots of lemon, shrimp cocktails and any type of fish. Always the devoted fisherman, from the bank, a boat and later a float tube. According to him, he was closest to his maker while in his float tube with a pole in the water alone on a lake.

After taking an early retirement as an NDI Inspector and Instructor, he took up wood carving where he won many awards for his pieces. He also painted for fun but most people never saw his work, unless you happened to be driving down Tyler Avenue on garbage day where Joe Camel and Bart Simpson made appearances painted on his trash cans. He always played the harmonica, mostly to the delight of his little girls and then one day, he picked up a guitar. This became his obsession. He transformed our childhood playroom in the attic to a music room which soon took over his bedroom and then the living room. Sheet music, scribbled notes for songs he was composing, recordings and instruments were everywhere. This is where he made lifelong friends through a wonderful man whom he adored that created a group called F.A.C.E. He met with them once a week, without fail, unless the fish were biting. He would also volunteer weekly to play his guitar and harmonica at the Golden Hours Center and local assisted living and nursing home facilities.

A quiet, talented, creative man who could fix or make anything, knew how to enjoy life like no other and was always in it to have fun. He was recently talking to a chaplain about poker of all things. When she asked him a question about a particular hand, he told her he had already won the best hand there is - when he got his family.  He cherished his wife and children, “special son and grandchildren”, his nephews, friends in his music groups and always said he had the best neighbors around. He was a well-loved man that is already dearly missed.

A special thank you to the Fresquez, Sackett, Thomas, Thornock, Rentmeister and Talia Howling-Dunham families, Mike and Ruth, William Pollett, Troy Howling, Golden Hours Center and Free Academy for Creative Expression for making his journey here all the more special.

To order memorial trees or send flowers to the family in memory of Richard "Dick" Lee Raun, please visit our flower store.