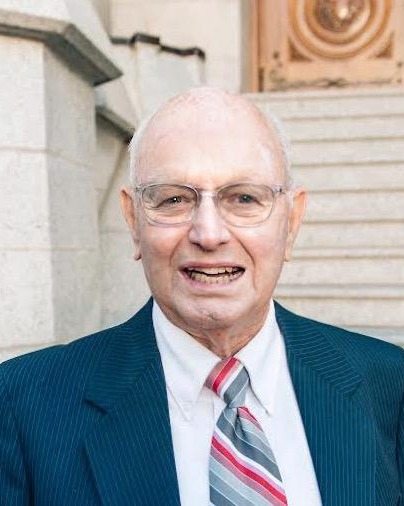 Richard was born  April 28, 1931 in Salt Lake City, UT to John and Pearl Brunner, the oldest of four children. He lived a life of service and adventure. In his youth he had several interesting jobs including a “pin setter” at a local bowling alley.  He spent his childhood summers on his grandparent’s ranch in Wyoming with the horses and the cattle.

After high school he served an LDS mission to West Germany shortly after WWII. Upon returning home he was drafted in the Korean War, reporting for duty in Germany as a Colonels Aid and interpreter.  While serving he competed in an Army Olympics winning the Silver Medal in the pole vault.

On return, he attended and graduated from the University of Utah in Accounting and married beautiful Bonnie Jean Weideman in the Salt Lake City Temple. They had 4 handsome sons all of which became Eagle Scouts, served LDS Missions, and attended universities.

Richard worked for Questar Corp. for 30+ years, retiring as the Company's Controller. He and Bonnie served as LDS missionaries in the Dallas, Ft. Worth Mission from 1995-1996. After returning they traveled the world from China, to Greece, France to Australia. Cruising to Alaska was always a favorite.

He played the trombone in the SLC “Post Office Band” and in the “Murray Symphonic Band.” Excelling at sports he loved skiing, golf, tennis, racquetball and was an avid hiker.

His easy laugh and kind smile were a great comfort to others. He loved to serve and always gave generously. He is remembered for his great love of ice cream and sweets which overflowed his freezer.

He will be greatly missed and loved always...

He is survived by his brother Ron (Mary), sister Gail (Harold), his 3 sons Hal, Bryce (Karen), Darin (Charisse), 9 grandchildren, and 6+ great grandchildren. He was proceeded in death by his wife Bonnie, brother Fred (Carolyn) and son Randy.

We send our deep appreciation and gratitude to the Auberge at Aspen Park Assisted Living, Memory Care Center for their tremendous love and support during the last 8 months of his life.

Services will be live-streamed by scrolling to the bottom of Richard’s obituary page.

To order memorial trees or send flowers to the family in memory of Richard John Brunner, please visit our flower store.