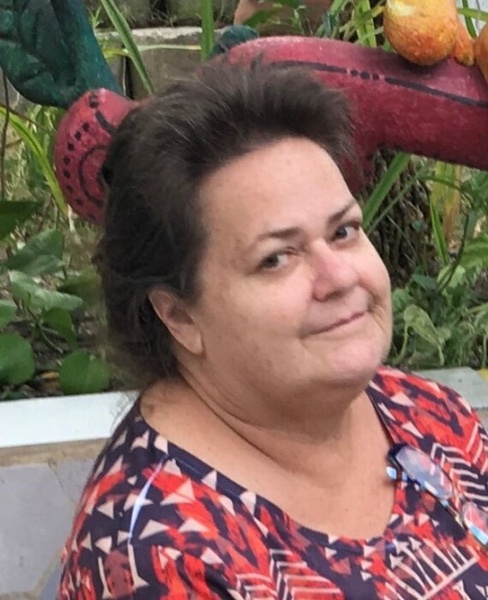 Patricia Emily Webb Hodge was born in Hayward, California, on December 29, 1952, to William Francis Webb and Gwendolynn Harriette Johns.  Trissie, as most people knew her, was the second daughter born to Bill and Gwenn, and the third of seven children.  Her older brother, Michael passed away at birth.  The family moved to Pleasanton, California, the summer of 1957, where she attended Alisal Elementary School and later Pleasanton Elementary school.  She played both the piano and flute and showed an interest in other instruments as well.

Patricia, Trissie, or Trish (as she preferred to be called), was a voracious reader, loved languages, (especially Spanish and French), had an endless sense of humor, and enjoyed traveling the world.  The summer after her sophomore year, she lived in Xalapa, Mexico with a Spanish speaking family as part of her Spanish language immersion.  She graduated from Amador Valley High School in 1970 and attended Brigham Young University where she graduated together with her older sister with a Bachelor of Arts degree in 1974.

Trish served a mission for the Church of Jesus Christ of Latter-day Saints from 1974 to 1976, learning Mandarin Chinese as she lived and worked among the people in Taiwan.  She met the love of her life, Daniel Cory Hodge, while he was also serving a mission in Taiwan.  They married for time and all eternity in the Salt Lake Temple, April 4, 1980.  After returning from her mission, she attended Stanford University earning her master’s degree in Spanish.

Trish taught Spanish and French for many years in multiple schools across the valley.  She also educated at-risk students in Sandy, Utah before serving as the Foreign Language Department Chair at Bountiful High for several years.

Together Trish and Dan had two sons:  Drew Cameron Hodge (1982) and Grayson Connor Hodge (1990).  She loved being with her family, helping them with homework assignments, encouraging them in their activities, and participating in camping and fishing adventures with them. Her grandchildren were her prize possessions. She loved and cared for them while their parents worked and making sure they knew they were loved.  Giving them chubby cheekers whenever she could steal them was the highlight of her time with them.

She also served in many capacities for her Church – Relief Society president, teacher, chorister, choir director, and even Cub Scout leader.  She took her callings seriously and did everything she could to make her lessons interesting, worthwhile and engaging.  In addition to her Church responsibilities, she was a longtime active member of the Daughters of the Utah Pioneers also serving in a variety of positions within that organization.  She was deeply interested in researching and verifying ancestral histories and did a marvelous job of updating and refreshing so many duplicated and repetitive family history stories.

Trish cherished her relationships with family and friends, alike…if you were her friend, you had her for life.  Her open heart and giving spirit touched many lives as she served others unconditionally.

Trish was committed to her extended family as well.  She attended every wedding for her siblings, nieces and nephews, and funerals for aunts, uncles, parents and grandparents, in hers as well as Dan’s families alike.

Our lives changed forever on Saturday morning, February 12, 2022 when Trish could no longer fight the ravaging effects of liver and renal failure following a quadruple bypass performed earlier in the week.  Our hearts are broken.  While she is gone from us, she is not gone - only gone on ahead.  We will be with her again, of this, we are sure.

She is survived by her husband, Dan; sons Drew (Kristen) of Layton, and Grayson of Kaysville; seven grandchildren; her older sister, Cathy Juchau (Kerry) of Surprise, AZ; younger siblings, David (Kay) of Canby, OR; Jim of Bigfoot, MT; Alisa Fullmer (Tim) of Sandy, UT; and Jon (Jana) of Lubbock, TX; as well as twenty nieces and nephews and their gaggle of children.

To order memorial trees or send flowers to the family in memory of Patricia Hodge, please visit our flower store.