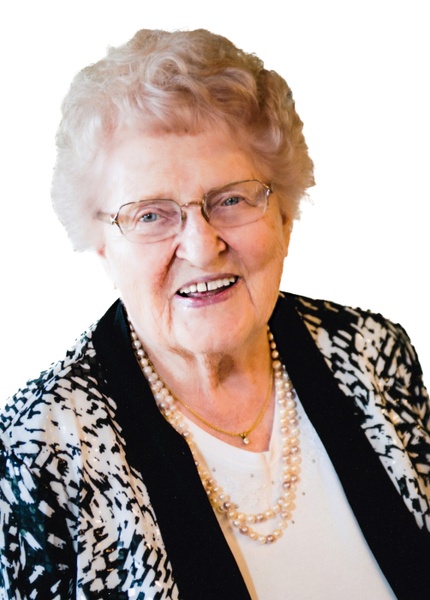 At the age of 100 years old, Mildred June Hurst Maw left this life for the next on Tuesday, February 1, 2022. She left behind her greatest treasures – daughters, grandchildren, and great-grandchildren. Her legacy included unconditional love for all, unending service, and an undying thirst for knowledge. She often reiterated that it was the only thing you take to the other side.

Born in El Paso, Texas, on June 20, 1921, Mildred graduated from high school at 15. Next, she attended Brigham Young University, where she studied business, finance, and journalism, earning honors and a nomination into Who's Who in American Universities. After graduating from college with a Bachelor of Science degree in Business and a second degree in Spanish, she worked as a secretary for the Deaf and Blind School in Ogden, the Southern Pacific Railroad in Texas, GE, and Senator Watkins of Utah in Washington, D.C. Upon settling in Ogden, she was an instructor of business skills at Weber State for many years.

On May 29, 1958, Mildred married her noble and loving husband, Grant Streeper Maw, in the SLC Temple. Together they had three daughters, Meridee, Cynthia, and Jeanette. She served in many callings for The Church of Jesus Christ of Latter-Day Saints, including Relief Society President and instructor for Relief Society and Gospel Doctrine classes, which she taught for over 25 years until the age of 85. She served tirelessly as a proud member of Daughters of Utah Pioneers, Weber State women's groups, and school and community organizations throughout Ogden. Another of her passions was genealogy, spending decades researching to complete temple work for her ancestors and more.

Mildred was a friend to all and maintained many close friendships for decades. Undoubtedly, she will be remembered for seldom speaking ill of others her entire 100 years, except maybe a politician or two. Her kindness and genuine interest in others left a legacy of love. Her granddaughter, Jessica McMurtry, summed up her life as "100 Years of Loving the World. 100 Years of the World Loving You Right Back."

Her children and grandchildren have beautiful memories of her stories about their Mormon pioneer ancestors. She treasured her scriptures and read The Book of Mormon to her children each night at the dinner table. Mildred often shared her love of learning, including historical and classical literature. She could still recite lines from Longfellow, Wordsworth, Coleridge, Bryant, and more just days before her passing.

Hours were spent with her siblings, children, and grandchildren playing Rook, Scrabble, Parcheesi, Chutes and Ladders, and more as she solidified precious relationships. Her laughter and sense of adventure were contagious. Spending time with loved ones was her greatest gift.

While singing was not her forte, she will be remembered for the lullabies she passed on from her mother that put her children and grandchildren to sleep under her loving care despite always being off-key. Although her children played many musical instruments proficiently, she insisted she played the radio best.

A legacy of exploration, to ancestorial and historical sites, are some of her family's fondest memories. These trips include the Mormon Pioneer Trail from Palmyra to Salt Lake City, the Mormon Colonies in Mexico where her Hurst and Call ancestors lived, Revolutionary War Sites during the Bicentennial Celebration, Washington, D.C., Great Britain, Europe, and National Parks. In true fashion as a teacher, Mildred prepared her family with nightly study sessions for months before.

Although she missed her late husband, Grant, her faith in the Lord and his plan of salvation carried her through the lonely months until he came for her.

"By an unfaltering trust, approach thy grave,

Like one who wraps the drapery of his couch

About him, and lies down to pleasant dreams."

The family wishes to thank her many caretakers over the years, who became beloved friends to her and her family. Mildred is survived by her daughters Meridee Theresa Maw Calder (Glen), Cynthia Ann Maw, Jeanette Maw McMurtry (John), eight grandchildren, and 12 great-grandchildren.

Dearest Mother, Grandmother, Great-grandmother, Aunt, and Friend, you are loved and missed. Your star will continue to guide us through your eternal strength and example. Shine On!

No coming, no going.

No after, no before.

I hold you so close;

I release you to be free.

Funeral services will be held on Saturday, February 12, 2022, at 12 p.m. at the Kingston Ward, 1425 Kingston Drive. Friends may visit with family on Saturday from 10:30 to 11:30 a.m. at the church. Interment, Ogden City Cemetery. Services entrusted to Lindquist's Ogden Mortuary.

Services will be live-streamed and available by scrolling to the bottom of Mildred's obituary page at: www.lindquistmortuary.com, where condolences may also be shared.

To order memorial trees or send flowers to the family in memory of Mildred Maw, please visit our flower store.