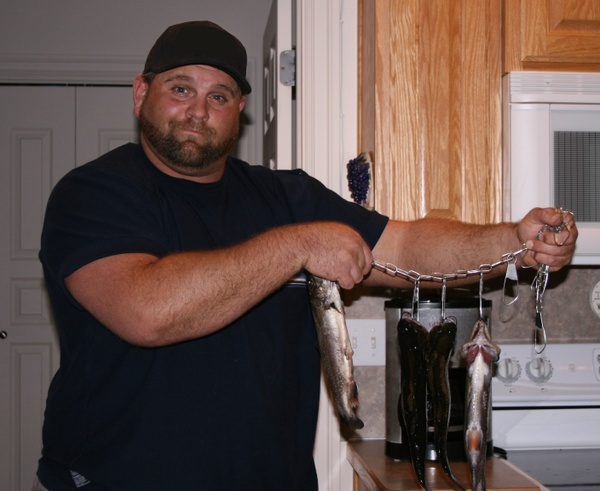 Michael Stuart Holley was born in 1975 in Ogden Utah. The son of Stuart Vernal Holley and Kimberly Stratton, and little brother Daniel, who would follow 3 years later. Michael was very athletic from an early age winning a baby race at the age of 9 months when he stood up and ran to the finish line while the other babies crawled.

He grew up in Roy and Layton, where he played a variety of sports including baseball, soccer, basketball, and football which would become his favorite. He attended Roy Jr High and Layton High where he wrestled, competed in numerous track and field sports and of course, his main love, football which he continued to play even beyond high school in a local semi-pro league.

He really loved camping trips to Yellowstone and all the wonderful memories with Grandma and Grandpa Holley. His father and Grandpa Holley took him fishing at a very early age which ingrained in him a passion that would never go away. He loved everything about it. Anytime they went fishing he wanted to go. In more recent years he found a passion for bow fishing, which he enjoyed with his children, Shianne and Braxton. He is one of the few people in this world that found Carp to be a beautiful fish. Although, he was happy catching anything. Michael was an animal lover. From the creepy crawly kind such as snakes, spiders, lizards, rats, frogs to man’s best friend.

He was especially proud of his children. Shianne Holley 25, and Braxton Holley 18, with whom he shared his love of fishing, music, trips to Bear Lake, Star Wars and the Raiders. Shi and Braxton were his world, they brought so much happiness and love into his life. That love extended to all his family and many friends. He had a special bond with his Mom.

He spent the majority of his career at Hill Air Force Base as an Electronic Mechanic Specialist, where he volunteered for many of the opportunities the base had to offer. He was asked to lead several functions to help boost morale which he willingly accepted. He was always ready and willing to donate blood for the American Red Cross, gaining a certificate of 25 gallons donated over the years. He was proud of that accomplishment.

Michael passed away at the age of 47 at his home in Washington Terrace, with his faithful dog Max by his side. He entered this world two weeks early and was a very happy and content baby, but struggled to sleep. This struggle continued through his adulthood as he was diagnosed with RLS (Restless Leg Syndrome), which he had from birth, and Idiopathic Neuropathy later in life. This caused Michael to experience constant pain in his legs. Some days were much worse than others. We take comfort knowing he can now rest in peace, free from pain and lack of sleep he experienced in life.

We will always remember Michael for his kind loving heart, his big teddy bear hugs, and his very infectious laugh. His mottos in life include: Stay positive and take it one day at a time; No Stress; Time is the ultimate healer. He loved a lot, laughed a lot, and lived his life in the moment. He will forever be with us in our hearts and minds.

Please join the family at a Celebration of Life in Michael’s honor on Tuesday, August 9, 2022 from 6:30pm to 8:30pm at Tuscany Gardens Reception Center in Roy, UT, 1856 W 4500 S. This will be an open house format so stop by anytime. In lieu of flowers, the family asks you please make a donation to a local animal shelter in Michael’s honor.

To order memorial trees or send flowers to the family in memory of Michael Stuart Holley, please visit our flower store.