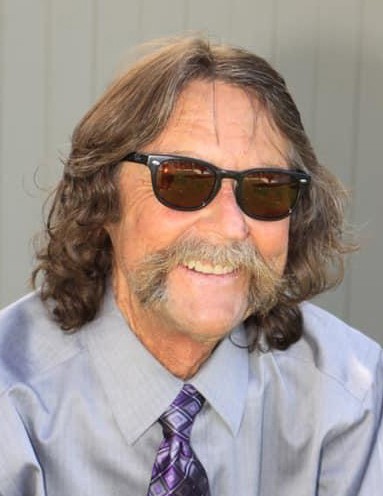 Mark Eldon Parker went looking for new adventures on Sunday, September 19, 2021. The last several months have been spent with family and friends, renewing old relationships, and sharing stories with laughter and love. Not everyone is blessed to be able to do this prior to leaving this world, and he treasured the time spent.

Mark was born on April 21, 1955 to Lynn J. and Irene Drake Parker, the seventh of eight children. In the fall of 1972, Mark went on his first date with a cute, petite blonde from Huntsville. So began a friendship which eventually grew into a forever love. Six years after that first date, Mark asked Wendy Bailey to marry him and they wed November 17, 1978. Following in his dad’s footsteps, he worked for the Union Pacific Railroad which he truly loved.

With everything Mark set out to do, he was “all in”. He was passionate (possibly obsessive) about the things he loved to do.

Mark grew up hunting and fishing. He would rather be down in the grove with his BB gun than in church…that was his spiritual way. As a boy, he enjoyed riding the train to Montana with his dad and brother, Kerry, for a weekend of fishing. He continued to go there almost every summer.

Around toddler stage, Mark would get bundled up and set out in the mornings to take care of the sheep with his Grandpa Drake. He was destined for some type of ranch/farm life. After moving back to the country, Mark established Parker 7 Angus and began raising registered Black Angus cattle. He took a lot of pride in raising solid performing Angus and met so many ranchers who became lifelong friends.

Mark’s most beloved passion was waterskiing. He learned to ski at around nine years old, but with so many kids in his family, each only got to ski for a few minutes. It was then he set a goal to have his own boat one day so he could ski as often and as long as he wanted. Around nineteen years of age, he would drive around looking and knocking on doors asking the owners if they wanted to sell their boat. He finally convinced someone grudgingly to sell him one. After work, on weekends, and every vacation were spent waterskiing. This passion evolved into performing waterski shows and skiing the slalom course. Mark started Golden Spike Water Ski and began coaching and encouraging others to take the slalom course challenge. The people Mark taught to ski are innumerable. This passion will live on in so many, so he truly did “Pass the Handle”.

Mark was welcomed home by his parents and grandparents. Those who will miss him are his loving wife, Wendy “Sweet Pea”; siblings, Deanna Jensen, Ron Parker, Barbara (Jim) Carter, Sheri (Don) Scott, Joan (Lamar) Hirschi, Kerry (Lori) Parker, Tim Parker, and many nieces and nephews who learned to waterski and kneeboard under the expert guidance of Mark.

There will be a celebration of life Friday, September 24, 2021 from 4 to 7 p.m. at the Parker Residence in West Haven, Utah. Funeral services will be held Saturday, September 25, at 11 a.m. at Lindquist’s Ogden Mortuary, 3408 Washington Blvd, Ogden, Utah. Friends may visit with family on Saturday from 10 to 10:45 a.m. at the mortuary. Interment West Haven Cemetery.

In lieu of flowers, please donate to a charity, plant a tree, or teach a kid to waterski!

A special thanks to Intermountain Hospice angels, Becky, Kristy, Monique, and Marcos.

To order memorial trees or send flowers to the family in memory of Mark Parker, please visit our flower store.