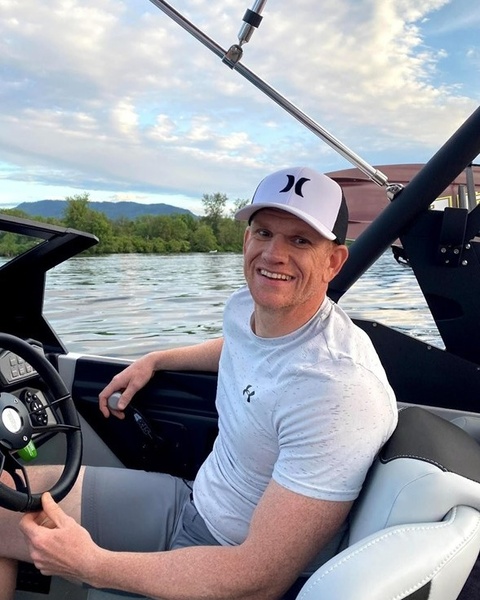 Mark Christopher McBride, our beloved husband, father, son, brother, uncle, nephew, and friend, passed away on October 4, 2022, at the age of 46 and was reunited with his son, Maxwell. Mark passed from this life after a yearlong battle with cancer.

Mark, the son of Michael and Jean E. McBride, was born in Ogden, Utah, on March 11, 1976. The third of five children (four boys and one girl), Mark was born just days before Mike, Jeanie, and their two older children moved into their newly built house in Syracuse, Utah. Mark spent his entire childhood in that house and made lifelong friends while growing up.

Mark married Jennifer Savage on August 4, 1999, in the Salt Lake Temple. He was, first and foremost, a loving husband and father who cherished time with his family. He especially enjoyed making his famous chocolate chip cookies for anyone who happened to be around to eat them, because he rarely ate sweets.

Mark graduated from Brigham Young University in 2001 with a bachelor’s degree in economics. He then completed his juris doctor (law) degree at the University of Utah in 2004. He also earned a master of laws degree in tax law from the University of Washington in 2005. Mark used his extensive education and skills to provide security and amazing life experiences for his family.

Mark began his career at Ahrens DeAngeli in Boise, Idaho, after completing his degrees. He moved to Perkins Coie in Seattle in 2011. During his 11 years with the firm, he prioritized the needs of his clients and helped grow the firm’s practice. Many clients grew to love Mark for his caring and professional service. As a partner at the firm, Mark also provided mentorship to many of his colleagues.

As a father, Mark always wanted to do the right thing, was an expert in listening to his children, and humbly shared what he learned in life. He was always in the present moment, accepted only tight hugs, and often sang randomly. Mark was fiercely loving, made his kids laugh in any circumstance, and took his kids on one-on-one dates because he wanted to have a personal relationship with each one of them. Mark truly believed in all of his children. As a husband, Mark was devoted and committed to providing safety and security for his family.

As a son, Mark was born to keep his parents’ lives from being boring and to make sure his own life was an adventure. He was a mischievous child who explored everything around him and loved hiding in closets to scare his parents and siblings. He grew to be an affectionate son and always expressed love to his family. Mark showed his love for life and others by caring for himself with his health-conscious eating and exercise.

As a brother, Mark set the pace, had the biggest, contagious smile, and made his siblings happy.

As an uncle, Mark lit up the room, was always ready to laugh, always made sure you were smiling—usually by teasing you—and made everyone feel part of the McBride family. As a nephew, Mark was all about love and was always quick to comfort others. Everyone loved his big, tight hugs.

Mark was a best friend to many and a friend to all regardless of your age. He greatly valued relationships with his friends, which lasted from his youth across decades. He especially loved connecting with and serving the youth of the Church. His high fives with every young man and young woman were legendary.

Mark was a lifelong member of The Church of Jesus Christ of Latter-day Saints. He served with love and dedication in many different capacities, including as a full-time proselyting missionary in the California Santa Rosa mission from 1995 to 1997 and as bishop of the Pine Lake Ward in Sammamish, Washington, from 2017 to 2021. Mark cherished the friendships he built and the opportunities he had to serve together with his friends during the years that he and his family lived in Sammamish.

Mark said, just days before his passing, that he was filled with comfort, peace, and hope. Mark showed great courage and testified that he had perfect faith in Heavenly Father’s plan and shared his faith right to the very end. Mark was an inspiration and a source of spiritual strength to all who knew him. He continuously sought to follow the example of his Savior, Jesus Christ, and was quick to say “I love you.” He often testified of the need for trials to learn the lessons we were sent here to learn from this life.

Mark was preceded in death by his son Maxwell, his mother-in-law, Laura Savage, and his brother-in-law Diego Grillo.

The family expresses their deep gratitude to the doctors and nurses from the Seattle Cancer Care Alliance, the Huntsman Cancer Institute, and hospice for their loving care of Mark.

Receiving will be held on the same date and in the same location prior to the funeral and will begin at 12 p.m.

The graveside service will be at the Syracuse City Cemetery (1250 South 1000 West, Syracuse, Utah 84075) immediately following the funeral service. Mark’s interment will be next to his son Maxwell.

Services will be live-streamed and may be viewed by scrolling to the bottom of Mark’s obituary page.

To order memorial trees or send flowers to the family in memory of Mark Christopher McBride, please visit our flower store.