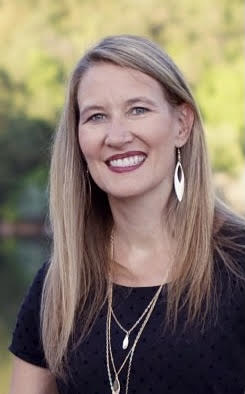 Marci Moulton Goddard returned to the open arms of our loving Heavenly Father on August 30, 2021, after a 2-year battle with the beast known as cancer.  She was victorious in the fight because, despite the aches and excruciating pains her body brought her, she remained optimistic, happy, and faithful.  Even on her hardest days she would be found serving others.  During the last hours of the fight, when asked how she was doing, her reply was, “Fantastic!”

Marci was born on the evening of March 3, 1977 to MyrLynn Haws and Thomas Dale Moulton in Logan, Utah.  She is the second of five daughters and although she was not a motorcycle (as her big sister had hoped), she was spunky and brave, and brought a smile that would light up every room she entered!

She spent her elementary school years in Logan, Utah where she was lucky enough to grow-up within walking distance of both of her grandparents’ houses.  She developed a love of swimming by spending hours in her Haws Grandparent’s pool and taking trips to Bear Lake with her Moulton Grandparents.  Her adoration of her grandparents led her to love family history.  Throughout her life Marci loved to hear and read stories about her ancestors.  She even studied their pictures and tried to get to know them.

Marci attended Jr. High in Dallas, Texas and then moved to Fruit Heights, Utah in 9th grade.  She blessed the lives of many people in every school she attended.  From the time she could walk Marci grew up dancing with her friends and cousins.   During her years at Davis High School Marci followed in her mother’s footsteps, participating with the drill team and the dance company.

Marci grew up a USU Aggie fan and developed a love of airplanes from her father whom she adored.  She graduated from Utah State University with a degree in Aviation.  Three days after she graduated, on May 9, 2000, she married the love of her life, Jason Goddard, in the Salt Lake Temple.  Together they had three children, her favorite son, Isaac Benjamin, and girls Abigayle Lynn and Isabella Sue who lit up her life every day.

Marci was continually serving others.  She held many different service callings within the church wards she attended, she was the PTA president for Antelope Elementary, and one of the things she was most excited about was being a licensed pilot and a 2nd Lieutenant in the Civil Air Patrol.

Marci was always a goal-setter, and hard worker who would push herself to accomplish whatever she put her mind to.  She got her first job at Lagoon when she was 15 and has worked hard ever since.

Shortly before being diagnosed with cancer, Marci decided to go back to school to earn her Master’s degree.  She worked tirelessly, even through terrible chemo treatments, to complete what she started.

She graduated from the University of Utah with honors this year with a Master’s degree in Early Childhood Special Education.  Marci loved teaching preschool at Creekside Elementary where she felt like she had found her calling.  She loved the people she worked with and her students so much that despite a terminal diagnosis, Marci continued to go to work right up until the week before her passing.

The phrase “I get knocked down, but I get up again! You are never gonna keep me down!” by Chumbawamba became a mantra that she lived by.  Despite disappointments Marci always remained positive and loving.  Marci’s shining example of love and light will live on forever.

The funeral services will be broadcast via Zoom for those who are unable to attend.

To order memorial trees or send flowers to the family in memory of Marci Goddard, please visit our flower store.