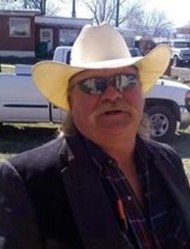 Lynn Jay Byington, “Dogface”, 66, was born in Logan Utah on October 23, 1955. He was the 7th of eight children born to Chauncey Elliot Byington and Ruth Anderson Byington.

Lynn passed away on October 27, 2021, surrounded by his loving wife and three of his daughters at Salt Lake Regional Medical Center, due to complications from Advanced Pulmonary Lung Disease.

Lynn was raised in Layton, Utah and was a resident of Roy, Utah for many years. He was a graduate of Layton High School Class of 1973. Then went into the Army where he served his country for four years as a Helicopter Mechanic and Crew Chief. Lynn retired from Davis County Canal Co. after 20 plus years.

Lynn was a member of The Church of Jesus Christ of Latter-day Saints.

All his friends and family knew him by his preferred nick name, Dogface. He was a crazy redneck who loved going riding on his motorcycle, horseback riding, camping and fishing every chance he got. He absolutely adored being surrounded by his grandchildren and great-grandchildren as he was very family oriented. He would do anything for them. He has so many nieces, nephews, cousins, and friends who loved him so much and he loved them all just as much. He would give you the shirt off his back if he thought you needed it.

In lieu of flowers, please consider helping with funeral expenses at Lindquist or at any America First Credit Union Branch.

To order memorial trees or send flowers to the family in memory of Lynn Byington, please visit our flower store.