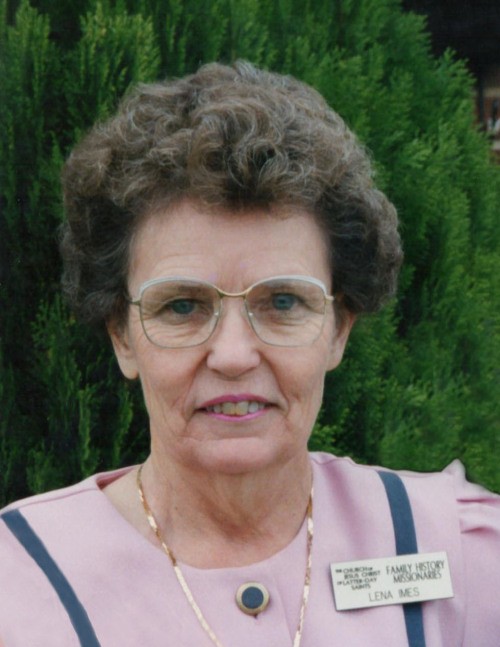 Lena passed away October 31, 2021. She was born December 3, 1935 in Ogden, Weber County, Utah, to Nathanial James Snyder and Dora Lee Laughter. She was the fifth of nine children.

She attended Ogden City Schools and was in the first graduating class of the new Ben Lomond High School and Seminary in 1954. She attended Weber College for three semesters and Stevens-Henager College of Business.

On October 12, 1955, she married the love of her life, Marlin Hugh Imes, in the Logan Utah Temple. Together they raised three boys while she worked a variety of jobs. Including packing sea rations for Booth Packing Company and would tend children at Pages Day Care and other children to supplement their income and she also tended her grandchildren regularly.

She loved growing and canning her own vegetables and fruit; she loved collecting a variety of many dolls; she made many beautiful ceramics and was a great cake decorator. She had a passion for putting many large puzzles together.

Lena taught Sunday School and was Secretary for the Junior Sunday School. She taught Primary for many years, was church librarian, and was Second Counselor over Homemaking in Relief Society. She also served as Homemaking Director in Relief Society and as a visiting teacher. Together with Marlin, Lena served as a guide at the Ogden Tabernacle Visitor’s Center. She also served a mission with Marlin at the Salt Lake Family History Center. Genealogy was her passion.

To order memorial trees or send flowers to the family in memory of Lena May Snyder Imes, please visit our flower store.
Send a Sympathy Card