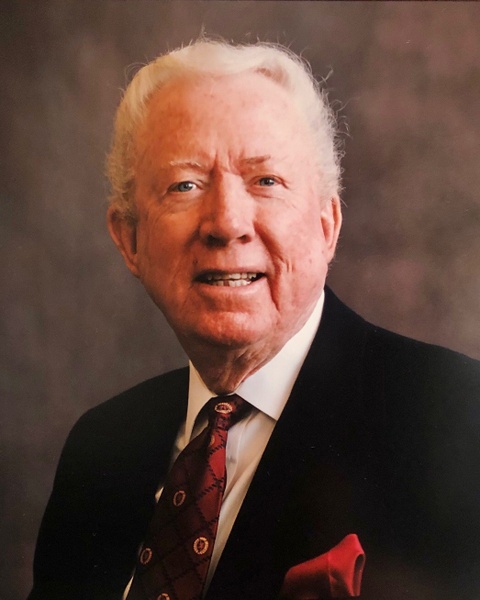 Kenneth Marion ‘Mose’ Flake – Our loving husband and father returned to his Heavenly Father on Tuesday October 4th, 2022, at the age of 98. He was born September 7th, 1924, in Snowflake, Arizona to Marion Lyman Flake and Cynthia Lou Morris Flake.  He loved his parents, four sisters and two brothers.

He learned the value of hard work as a young boy working on his family’s thirteen-acre ranch, four miles east of Snowflake, alongside his brother Charles and their Uncle Marsh. His family moved to Phoenix and then Mesa where he continued his education and became involved in music and theater. He served his country in the Army Air Corps during World War II where he trained as a pilot.

Ken served a mission for the Church of Jesus Christ of Latter-Day Saints in the Northern States Mission, the same mission his father and brother Robert had also served in. He attended Brigham Young University where his adventures began. He belonged to the Bricker Club where friends began calling him Mose, because he had red hair like Moses. From that time forward everyone knew him as Mose. He was a practical joker, a comedian, and even ran for Homecoming Queen under the name of Mosetta--and didn’t even come in last place. He was asked to be a Yell King (cheerleader), was a Big Band Singer, and often participated in stand-up comedy, which took him to Hollywood.

Ken married Phyllis Colleen Jensen on June 17th, 1950.  Over the next several years, they welcomed five beautiful daughters into their family.  They later divorced. Ken loved dancing and at a Stake Singles Dance, he met Alice Ruth Paulson Thatcher; they married on Valentine’s Day, February 14th, 1983.  Alice brought seven children into the marriage, making twelve children between the two of them.

Ken worked hard throughout his life and was an entrepreneur, where he invested in power plants and real estate, among other things.  He loved to travel, and he and Alice had many fun times going to Japan, Korea, and Fiji.  Ken enjoyed spending time with his combined family and took them on many fun trips including a Caribbean Cruise, Park City, Jackson Hole, and Mexico.

Some of Ken’s favorite hobbies included golfing, singing, and dancing.  He was an avid BYU fan!  He was a proud member of the BYU Cougar Club and had season tickets to football and basketball games.

Ken loved his Savior and served in many positions in The Church of Jesus Christ of Latter-Day Saints.  He especially loved teaching the youth.  Even in his late 70’s, Ken’s favorite calling was being Brother Friendly.  He reminded the Primary children each Sunday of their Savior’s love, and had rings made for each of them with the initials IGBJLM - “I’m Great Because Jesus Loves Me”.

The family appreciates the outpouring of love that has been shown from neighbors, friends, and family.

Condolences may be shared at www.lindquistmortuary.com.

To order memorial trees or send flowers to the family in memory of Kenneth Marion 'Mose' Flake, please visit our flower store.