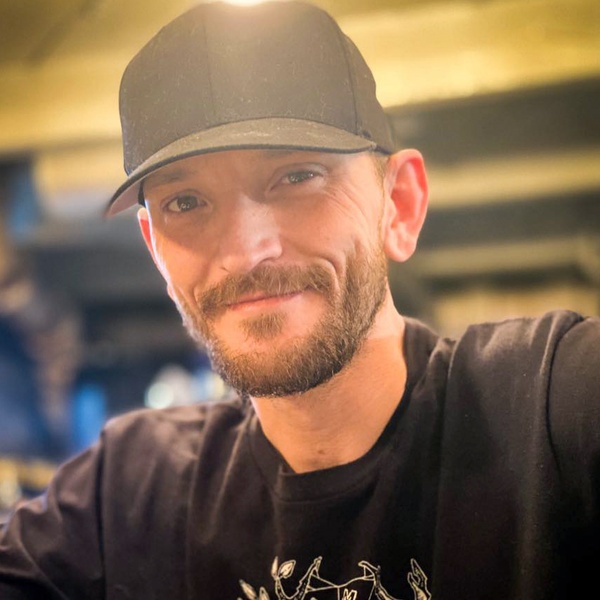 He was an Ogden man through and through. He was born in Ogden on February 8, 1982 and spent most of his time in his hometown of Ogden. Young Jonny attended Kanesville Elementary, Rocky Mountain Junior High, Fremont High School, and Washington High School, but if you had asked him, he'd say he got his real education from the school of hard knocks. In his "rough and rowdy" years, you may have seen him tearing through town in his blue '71 Chevy around the time he entered the music scene.

Jonny was in many bands throughout his life, starting with Idol, Discourse, and Our Constant Divide (OCD). He was most recognized as the frontman and songwriter for The Highway Thieves, where he rocked guitar, sang lead vocals, and played harmonica. His gravelly, bluesy voice was one-of-a-kind, and fortunately, his family has many hours of recordings and video to enjoy and remember him by.

Many of his fondest memories include his years on Ogden's Historic 25th Street. He enjoyed his time slinging food and joking around in the kitchen at the Bistro 258, playing music all over town, and booking bands and running the stage for the Ogden Equinox celebrations. His latest adventure was operating as stage manager and stage technician for The Lighthouse Lounge. He turned his stage into one of the best in Ogden, where everybody knew you could see an exceptional live band every weekend. He put that place on the map, and it's an energy he carried with him throughout his life with any occupation.

He was well-loved by many local musicians and was the luthier of Turner Guitar Company, where he created custom guitars and provided guitar tech services for a long list of professional musicians. Providing the tools to manifest music to any and all who desired it was Jonny's ultimate passion and vision. He took his creative work seriously, and it showed in the dedication and love that he crafted into every instrument he put his hands on. This love of music extended to his consistent outpouring of support to aspiring musicians all over Utah, especially when pioneering the local FamJam open mic so musicians could find their people. Many bands were created over the years through Jonny's ability to bring people together with music and love.

Through the same music circles, he connected with his wife, Mackenzie. He noticed her freezing by the fire on a frigid Spring Equinox night and invited her home to get some sleep. After an interesting nighttime crawl through West Ogden, they finally got home, and she never left. Shortly after that, they introduced Jasper Lee to the world, which changed his entire world. They later married at Loud House and soon welcomed Eldon into the world at the same place, a home that has witnessed the raising of three generations of Turners.

John focused his most intense love energy on his wife and sons. When Jasper was asked what he wanted people to remember about his dad, he said, "Dad always put us before himself." He was such a devoted father and focused a lot of his intentions on creating a world in which his family could thrive.

Jon had a Zorba-like heart and often ruminated on Kazantzakis' quotes in his head, often the naughty ones. Since we can't share those, we'll go with "My son, I carry on as if I should never die.' I replied: 'And I carry on as if I was going to die any minute." ― Nikos Kazantzakis, Zorba the Greek.

Family and friends are invited to visit with family on Wednesday, June 8, 2022 from 5 to 8 pm at the Lindquist’s Ogden Mortuary, 3408 Washington Boulevard. Graveside services will be held on Friday, June 10th, at 10 am at the Ogden Cemetery, 1875 Monroe Boulevard.

The day will lead into a celebration of life with details to be announced later. Additional fundraisers are also being planned.

Thank you to everyone who has reached out with love and support. Your love is overwhelming and positive and a testament to the true power of community and love, something Jonny truly believed in.

To honor Jonny, do what you know he'd want you to do: sing a song badly, get crazy, hug your kids, snuggle your pets, make your wife blush, and say I love you like it's the last time every time.

"I don't know how much time we have left here so I wanna get real weird with it." Jonny Turner, 2022

Graveside services will be recorded and available to view Friday evening by scrolling to the bottom of Jonny’s obituary page at: www.lindquistmortuary.com, where condolences may also be shared.

To order memorial trees or send flowers to the family in memory of Jonathon "Jonny T" David Turner, please visit our flower store.