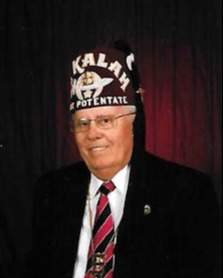 SLC, UT—Born February 12, 1938 – Passed away November 4, 2022, from COPD and Congestive Heart Failure.  He was born in Logan, Utah to Afton Stuart Harris and John Allen Harris. Jon grew up in Ogden, graduating from Ben Lomond High School. He joined the Army and was stationed in Germany as a tank commander. Returning home, he was a salesman at Butler’s and managed B&B clothes store. Later he worked at Zales in SLC for many years, retiring as manager. Jon won many awards and trips as top salesman/manager with his “gift of gab”.

He joined Unity Lodge #18 Free and Accepted Masons and was raised to the degree of Master Mason. He is a member of Twin Peaks Lodge #32, Scottish Rite, El Kalah Shrine, and Potentate in 2008.  As a Shrine Clown, he was known as “Spinner” and loved clowning in parades and volunteering at Shriners Children’s. He proudly served on the Board of Governors and secured international symbol(statue) for the Salt Lake Hospital. He was also, a Past Assoc. Grand Guardian for Job’s Daughters International. Jon loved to fish, take photographs, and play Texas Hold’em with the guys. Jon and Louise traveled the world, chased lighthouses, and square danced with the Red Hots making lasting friendships.

Services will be held on November 14th, at First Baptist Church, 777 South 1300 East, SLC at 11 am.  Family will greet friends from 10 to 11am in the Parlor before services.  Interment at Lindquist’s Memorial Gardens of the Wasatch, 1718 Combe Road, Ogden, UT at 2pm.

In lieu of flowers, make donations to Shriners Children’s in SLC.

To order memorial trees or send flowers to the family in memory of Jon Wayne Harris, please visit our flower store.