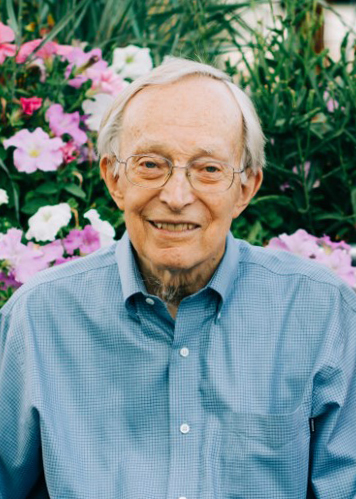 Dick was born January 5, 1936 in Montpelier, Idaho to John Henry and Gladys Merrill Schmid.  He was the youngest of four children.  He graduated from Bear Lake High School in 1954 and served in the Swiss Austrian Mission from 1956 to1959.

He married Sherry Telford Schmid on April 24, 1964 in the Logan Temple of the Church of Jesus Christ of Latter-day Saints and they recently celebrated their 58th wedding anniversary.

He attended the University of Idaho and later received B.A. and M.A. degrees in mathematics from Brigham Young University.  Dick and Sherry started their family before continuing his education in Ames Iowa where he earned a PhD in statistics from Iowa State University.

After earning his doctorate degree, they made their home in the Ogden area.  He taught at Weber State College and spent the majority of his career in the aerospace industry.  He was well respected in his field and received multiple awards during his career before retiring at age 70.

He was an active member of the Church of Jesus Christ of Latter-day Saints and served faithfully in many callings throughout his life.  His faithfulness to the gospel was a great example to his family.  His service to others extended to neighbors and friends.  He always looked for ways to serve those around him.

Education was important to Dick, and he encouraged and facilitated his children and grandchildren in furthering their education.

He planted and cared for a large vegetable garden each summer and was eager to share the abundance of his garden with family and neighbors.

Dick and Sherry shared a love for travel and made great memories while traveling to multiple countries with family and friends.

Family is everything and he had a great love for his family.  This love went beyond his immediate family, and he maintained close relationships with extended family.  He had great respect for his ancestors and knew and shared their stories with his children and grandchildren.

One of his greatest joys was gathering with family.  They made their home a welcome place for family and others to visit and all who entered felt loved and important.

He was preceded in death by his son Mark Schmid, his parents, and sister Mary Harding, and two brothers-in-law James Harding and James Spencer.  He is survived by his wife Sherry and three children:  Stephanie (Craig) Tonks, Nancy (Justin) Mott, and John (Amy) Schmid, daughter-in-law Cheryl Schmid, thirteen grandchildren and four great-grandchildren and another that will be joining us soon.  He is also survived by two sisters, Helen (William) Bassett and Dorothy Spencer.

Interment will be at the Montpelier Cemetery in Montpelier, Idaho at approximately 4 pm.

Services will be live-streamed and may be viewed at www.lindquistmortuary.com by scrolling to the bottom of John’s obituary page

To order memorial trees or send flowers to the family in memory of John Richard Schmid, please visit our flower store.