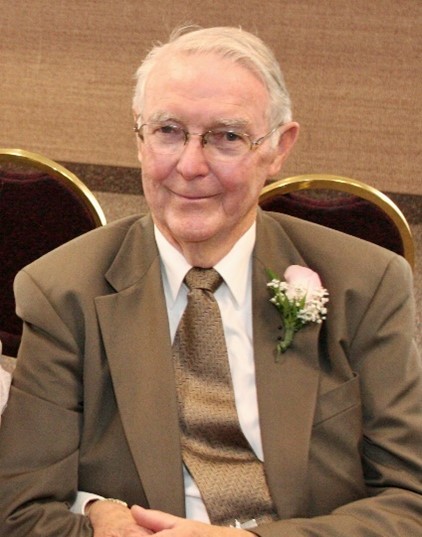 Jerry Lewis Wilson (Ret.) was born on the 2nd of December 1933 in Neodesha, Kansas.  He was the oldest son of Melvin Thomas Wilson and Eva Irene Elliot.  He left his home in Kansas for the United States Air Force and over a 20-year career rose to the rank of Major.

Through his associations in the military, he met his future mother and father-in-law while playing Bridge in the Officers Club and fell madly in love with Ruby Marie Nuhn whom he married on December 31st, 1965, in Preston, Idaho.  They settled down in Indiana and were soon blessed with two sons, Leslie Carvel Wilson and Andrew Thomas Wilson.  His service in the Active-Duty Reserve Air Force came to an end with 20 years of service in 1973. The family moved to Boise, Idaho so Jerry could finish his college degree and to be closer to Ruby’s family.  When he finished his degree they moved to Sunset, Utah and Jerry worked for more than 20 years for the Davis County Assessor’s Office.  Dad helped Mom raise the boys, spoil their grandchildren, mostly by paying for her spoiling of them, as they created magical Christmases, Birthdays, and just plain fun for their children and grandchildren. During this time, Dad was drawn into Genealogy and extensively researched both sides of his family, eventually gathering over 16,000 names.

When Mom died unexpectedly in 2000, Dad threw himself into research, often spending 10 of more hours doing so, which helped him manage his grief.  A few years after Mom’s death, he met and married Venna Merritt Harmon through his research at the Geological Library in Ogden and they fell in love and were married civilly.  They lived in Roy for a few years balancing two families, temple work, and genealogy until her sudden death in 2007.  Dad once again threw himself into research and lots of time researching his ancestral family.  While researching Genealogy at the Ogden Family History Center, he met and fell in love with Bernice Emma Petit Potter, and they got married in 2009. They served a mission together down in Arizona helping those who needed to know how to set up a garden, as well as helping them get their family history done.  They had a joyous time together celebrating family, going to the temple, and doing Genealogical research both home in Layton and when they snow birded in Quartzite, Arizona.  They were each other’s best friends who doted upon each other, carried each other through illness and injuries, and continued deepening their knowledge of the Gospel of Jesus Christ.

Dad will be missed by many whom he influenced for good during his long and blessed life as he worked for his family, loved his kids and grandchildren, and served the Lord.  We know that he touched the lives of many with his quiet work, his wry humor, and his big heart.  We know however that there is a big reunion happening in Heaven.  He passed peacefully in his sleep on the 10th of June 2022.

To order memorial trees or send flowers to the family in memory of Jerry Lewis Wilson, please visit our flower store.