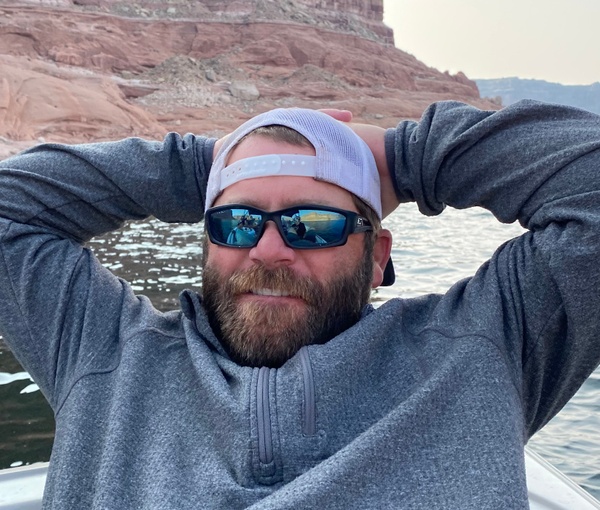 It’s hard to sum up the life of someone who influenced so many. Dad may not have been large in stature, but he was mighty in spirit. We couldn’t go anywhere with this man. Every time we left the house, he would run into someone he knew, and spend hours catching up with them. Seriously, we took separate cars to church so he could visit all afternoon.

Dad was pretty darn funny, just ask him. You’ll never meet a person who appreciated puns more and he had an endless arsenal of dad jokes, but don’t worry Carly will carry on his legacy. He was always trying to make people laugh whether it be by his “I’m kind of a big deal” strut, his finger guns and goofy faces, or his dancing “skillz.”

Dad was always all in with everything he did. We called him the family drama king, but he would say “I’m not dramatic, I’m passionate.” And he was, dad was passionate about everything. His family, his work, his relationship with God, and babies. Dad loved babies, he was always begging mom to have more, and we were always begging her not to. And when he finally gave up on asking her, he started nagging us about grandbabies. Dad recently received his dream calling as nursery leader. He went to church giddy, would leave sacrament early to make sure everything was up to par in the nursery, and after church we’d all get to hear stories when he eventually got home.

Most importantly, Dad had the biggest heart of anybody ever. There was never a time where we wondered if he loved us, because he never hesitated to tell and show us. We feel like this is dad’s greatest trait. It extended beyond our family to everyone he came in contact with. Even when he had no time, he’d make the time to serve someone in need. Though intimidating to many, he was a giant teddy bear. He gave the best hugs. Even if he did lose his temper, he was quick to apologize and would usually come to you in tears to ask forgiveness and talk it out. Dad was a wonderful man in part thanks to his amazing parents and siblings. There was nobody he spoke higher of than his mom, she was his hero. Dad was always telling funny stories about his family growing up. His parents, Scott and Cindy, and his siblings Jamie and Josh were of paramount importance to him and played a big part in the man he became.

Although we will spend the rest of our lives missing him, we are so grateful for his amazing example and will cherish our memories with him forever. Till we meet again, we love you dad!

We have been overwhelmed by the love and support of all those who have reached out, shared stories, and provided service to our family. We are forever grateful. Thank you!

Services will be live streamed.  The live stream will be available by scrolling to the bottom of Jacob's obituary page at lindquistmortuary.com

In lieu of flowers, do what Dad would do, go get ice cream with your kids (after you make them lay sod, obviously). Seriously.

To order memorial trees or send flowers to the family in memory of Jacob Shepherd, please visit our flower store.