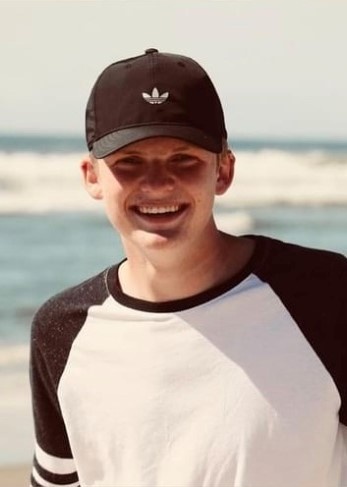 Just days away from his 21st birthday, on an ordinary day at home with his family, Jackson Ron Kartchner was unexpectedly taken home by his Heavenly Father. He experienced a fatal seizure on July 4, 2022.

Jackson was born July 10, 2001, to Jason and Lora Kartchner, of Kaysville, Utah. He is a brother to Landon, Avery, Seth and Isaac.

Not one to say much about his feelings, Jackson nevertheless made a difference when he did. One of his greatest traits was the quiet way he expressed his kind, generous heart. Those who knew him best could see that kindness was a sincere part of his being. As a child he would bring half his treats home to share with his mom, and when they went out to eat, just because he knew his dad loved them, he always had leftovers to share. Jackson remembered birthdays, didn’t judge people and loved everybody. He was a loyal friend, and they knew they could count on him.  They enjoyed his ready smile and funny streak.

Jackson was smart - so smart that when his mom teased him that if he was going to play video games with his brothers, friends and cousins as much as he was, he’d better find a way to make money doing it.  He did. That and a variety of other jobs helped him pay for school. He was working on a degree in engineering through Weber State University.

Jackson enjoyed accomplishing things, and when he had a job, he jumped in and worked hard to get it done.  He didn’t complain; rather, Jackson took what he was given and made the best of it.

How a handsome skinny guy could have the nickname “Fat Jack” seems crazy, but the darling chubby baby cheeks and endless rolls from head to toe that he had earned this lifelong term of endearment.  Jack loved his family’s adventures as they went camping, riding motorcycles, four-wheeling, and hunting.  He loved to play the guitar and to go to the gym with Landon.

He shared an appreciation for fast and fine cars with Seth and they enjoyed getting into a good discussion about them.

Teasing Avery was great fun for Jackson, but he and his baby sister were loyal, great friends, as were he and Isaac, who shared his love for gaming.

The first thing Jackson would do when he came in the door, was to call for the light of his life, his dog, Nala. Fascinated with all kinds of animals and hoping to convince his parents that he needed this or that creature, he’d shop KSL classifieds and leave not-so-subtle hints in his mom’s phone, such as contact information for a “parrot lady” or “chinchilla lady.”

Jackson could really boot a soccer ball and he loved playing for Davis High and several clubs.  More recently he has enjoyed playing on a men’s league with Landon and some friends.

He was blessed with a large extended family, some of whom were the best of his many friends.  Jackson is desperately missed by them, his family and his sweet girlfriend. He was preceded in death by a cousin and the grandfathers after whom he was named.

Interment will take place in the Kaysville City Cemetery.

Services will be available to view at the following link:

To order memorial trees or send flowers to the family in memory of Jackson Ron Kartchner, please visit our flower store.