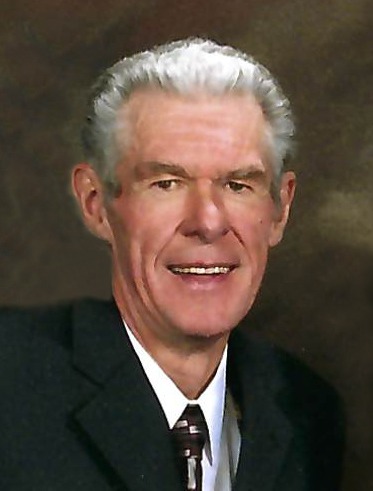 J Sherman Strate, 84, of South Ogden, passed away on July 17, 2022 at home after a life-long battle with Crohn’s disease. He was surrounded by his wife and three sons.

Sherman was born on August 14, 1937 to Fredolph McKinley Strate and Utahna Christena Jensen in his parent’s home. He was the second of five boys. They lived in Spring City, Utah and had a dairy farm. In addition to working on the dairy farm, he raised ducks and geese. That loved him and would come running when they saw him.

After graduating from high school, he served a mission to Denmark. Upon returning in

March 1960, he went to get his patriarchal blessing and met a pretty brunette, Rudy, that worked as the stenographer. He asked her out and she became his sweetheart. They were married September 9, 1960 in the Manti Temple. They had three sons, Jeffrey Sherman, Brent Jay, and Jason McKinley.

Sherman graduated from Snow College and while attending Utah State University, became ill. He quit school and worked for Ford Ogden Sales but struggled with his health. He was diagnosed with ulcerative colitis and had major surgery to address the issue. Since that time, he was diagnosed with Crohn’s disease and battled major health concerns the rest of his life. He moved his family back to Spring City in September of 1961 and worked on the dairy farm for several years. He then built his business, Sherm’s Garage and Quality Parts. Sherman was an honest, hardworking man. He was a problem solver and used ingenuity in coming up with solutions. If he didn’t have the parts to fix something, he would make it himself! After ten years, he closed his shop and worked as the transportation supervisor and mechanic for North Sanpete School District and retired after 22 years of service in 2002.

Sherman was an unpretentious, quiet spoken leader in his community. He was a Spring City Fire Department volunteer and fire chief. He reestablished the Little League Baseball program in Spring City. And while serving on the city council, he oversaw the perpetual care of the Spring City Cemetery.

Sherman was a deeply religious man and was an example of quiet, loving, and compassionate service. He could often be found visiting at the homes of neighbors or helping the widows that lived in town. He served in a wide variety of callings throughout his life as well as working in the Manti Temple with his wife. He was instrumental in working with the community in preserving and expanding the pioneer chapel in Spring City. He served two missions to Denmark. His first mission was from 1957 to 1960 as a youth, and his second mission with his sweetheart from 2002 to 2004.

Sherman was a dedicated family man. Much of the time they spent together was working, self-sufficiency was an important endeavor. The family had a large garden and they worked to preserve the food they grew. Sherman taught his family how to serve others and find the joy and satisfaction that comes from that service. He was always more concerned with the activities he did with his family, not with the “guys”. Hunting and fishing trips were a whole family affair. There was also the annual trip into the mountains to cut down the family Christmas tree. They spent time together visiting national parks and took a few cross-country trips picking up school busses from Georgia. When their boys were involved in high-school sports, Sherman and Rudy went to every one of their games. Sherman would often tell his children and grandchildren, “You’re raised on dried ice and doughnut holes” when they were being mischievous he could be heard calling them a “Fisica-hoot-owl”. When they were pouty, “Poor little bitsy, has such a hard time” and when tucking children in bed would say “snug as a bug in a rug”.  Once he said to one of his sons “sleep tight, don’t let the bed-bugs bite” and then had to stay up all night with his son because he kept saying “bugs bite”! Some of the nicknames his family would affectionately call him were “Popsicle”, “Cresent Wrench” and “Daddy-long-legs”

Sherman is survived by his wife of almost 62 years, Rudy Strate and his three sons and their wives, Jeffrey and Rochelle Strate, Smithfield, Utah; Brent and Michel Strate, South Ogden, Utah; and Jason and Julie Strate, Central Valley, Utah.  Sherman and Rudy have 17 grandchildren and 4 great-grandchildren. He is also survived by his brother, Stephen Strate. Sherman was preceded in death by his parents; brothers, Phillip Strate, Kenneth Strate, Kendel Strate; and nephew, Chad Strate.

In lieu of flowers, the family requests donations be made to The Crohns and Colitis Foundation

Services will be live-streamed and available by scrolling to the bottom of Sherman's obituary page at: www.lindquistmortuary.com, where condolences may also be shared.

To order memorial trees or send flowers to the family in memory of J Sherman Strate, please visit our flower store.