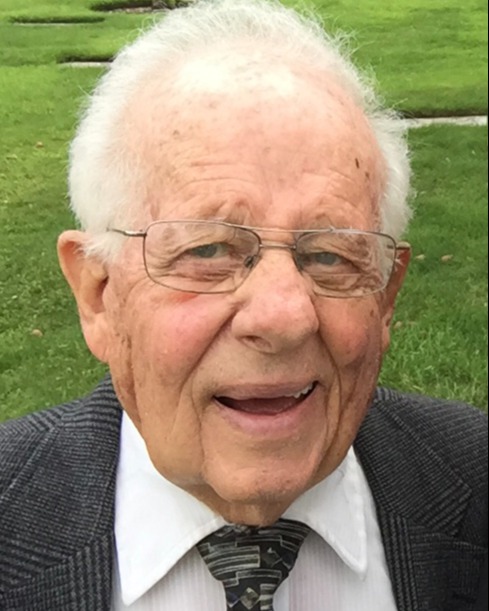 J Vernon Clark passed away peacefully in his sleep on January 21, 2023, at the age of 98. During the past several weeks as his health declined, he was surrounded by family as they cared for and visited with him. No one was more present and helpful than his daughter, Jolene, who he described as his “lifesaver”. Never one to be still, he insisted on getting up each day and moving around even as it became increasingly difficult, including the last day of his life. In some of his last words before he passed, he exclaimed, “I’m not a wimp!” and everyone that knew him knows that’s true.

J was born in Nampa, Idaho, in 1924 but spent his growing up years in Salt Lake City. After serving a mission for The Church of Jesus Christ of Latter-day Saints in the Northern States Mission (1947-1949), he made his home in Bountiful where he lived in the same house since 1956. Professionally he worked as a salesman for Beech-Nut Life Savers and traveled throughout the intermountain west supplying stores with all sorts of candy. Because of his profession, many people knew him as the “candy man”.

After retiring in the early 1990’s, he and his wife, Ruth, served a Church Educational System (CES) mission in Chicago (where they both had served missions in their youth) working with the CES literacy program. He also spent many hours working on cars at his brother and son’s used car dealership in Salt Lake. He could be found tinkering around with cars to fix them or picking up cars that were donated to the American Lung Association with his teenage grandchildren. He continued to spend time at the used car dealership in the last years of his life.

He was the quintessential people person. Everywhere J went, he would find ways to connect with the people around him, often finding common interests or people they knew. He had a genuine love and interest in everyone which endeared him to many people of all walks of life everywhere he went.

He was proceeded in death by his wife, Ruth Christensen Clark; his parents, Vernon and Bessie Clark; and his brother and best friend, Dean Clark.

He is the proud father of six children: Jolene, Steven (Joyce), Su Lin (Nathan), Chris (Linda), Mark (Shellene), and Caralee (Grant). He has 30 grandchildren and 66 great-grandchildren.

A viewing will be held on Saturday, January 28, 2023, at the Bountiful 11th Ward of The Church of Jesus Christ of Latter-Day Saints located at 115 E Wicker Ln, Bountiful, UT 84010 from 9:30 AM – 11:30 AM with funeral services beginning at 12:00 PM. Following the funeral service, J will be interred at the Lakeview Cemetery in Bountiful.  Services will be live-streamed by scrolling to the bottom of J obituary.

To order memorial trees or send flowers to the family in memory of J Vernon Clark, please visit our flower store.