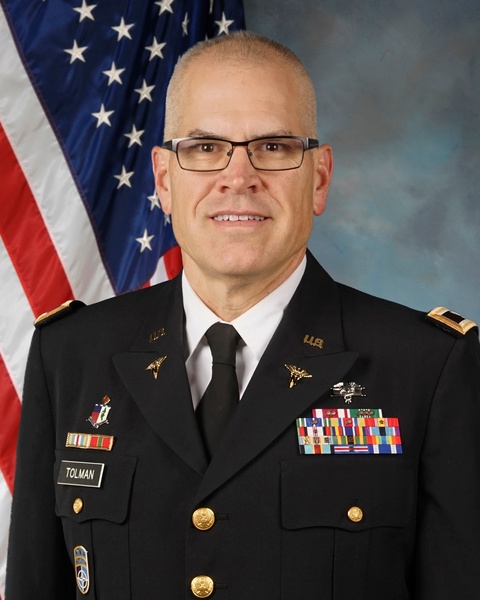 Our loving husband, father, son and grandpa, Ian James Tolman, 58, passed away after a courageous battle with cancer on March 23, 2022.  Ian was born on December 31, 1963 to Gordon and Ann Tolman.

Ian enlisted in the Army Reserve in 1981 as a 17-year-old high school junior.  He served 38 years until his retirement in February 2019.  Ian loved the Army.  Through his time in the Army, he earned his Bachelor’s degree in Nursing from the University of Phoenix, a Master of Nurse Education degree from the University of Wyoming and a Master of Strategic Studies degree from the Army War College.  He deployed to Germany during Desert Storm and to Helmand Province, Afghanistan during Operation Enduring Freedom.  Ian received many honors and awards during his time, he was an outstanding soldier, but what he loved the most was the comradery he felt with his fellow soldiers.  He had so much love and respect for all of you.  He loved the Army values: Loyalty, Duty, Respect, Selfless Service, Honor, Integrity and Personal Courage.  He lived by those values as they reflected his own.  After retirement from the Army, Ian started working for Intermountain Healthcare in their dialysis department.  He loved his time there and the people he worked with.

Ian loved hiking, working on projects at our home, adventures and trips with his family, watching his children participate in their various activities, providing service to others, and spending time with family and friends.

Anyone that knew Ian, knew how much he loved running.   A cherished memory was the Bataan Memorial Death March marathon he completed with his “Band of Brothers” in 2002. And creating the “Road Runners” club while he was in Afghanistan.

Ian is a lifelong member of the Church of Jesus Christ of Latter-Day Saints.  His testimony of our Lord and Savior was unwavering.  He loved serving in the church, especially his time as the Young Men’s President in Georgia.  A great group of young men he would say.  One of the last things Ian did in his earthly mission was to share his testimony with his family. His faith was strong and always will be.

Ian cherished his family most of all. Ian married his sweet eternal companion, Janet McCarver Tolman on March 16, 2002. Together Ian and Janet built a wonderful life for their family. His children were his pride and joy.

He is preceded by his father, Gordon Tolman and brother, Robert Tolman.

“Those we love don’t go away; they walk beside us every day.  Unseen, unheard, but always nearby.  Still loved, missed and very nearby.”

A Visitation will be held Sunday, March 27, 2022, from 6-8 p.m. at Lindquist’s Bountiful Mortuary, 727 N. 400 E. Bountiful, UT. Funeral Services will take place on Monday, March 28th at the Reading Ward Chapel, 1461 North Main Street, Centerville, where friends may visit the family from 9:30-10:30 a.m. prior to the service. Interment will follow at the Bountiful City Cemetery.

To join in a Zoom Meeting the day of the service provided by the Reading Ward please click on the following link:

To order memorial trees or send flowers to the family in memory of COL Ian James Tolman (Ret), please visit our flower store.