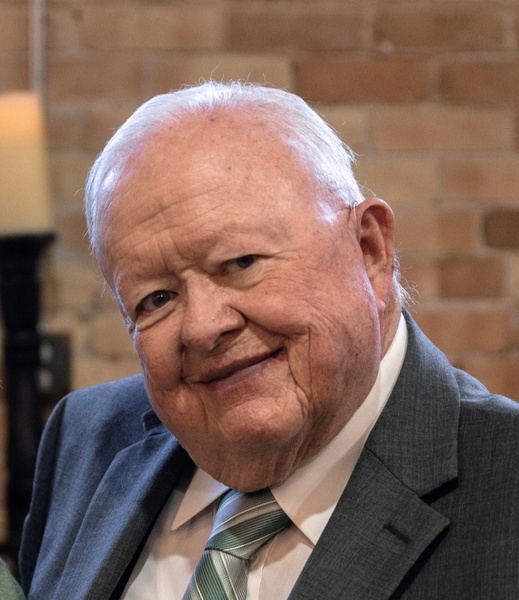 Henry Edward Moffit of Kaysville, Utah returned to his Heavenly Parents on April 9, 2022, at his home surrounded by all his family.

He spent his childhood in Weiser, Idaho and enjoyed spending many happy days on his grandparent’s farm.  In school he grew to love playing the piano, saxophone, and clarinet, but his true love was singing.  His family moved to Sweet Home, Oregon where he graduated from high school.  He served a mission for the Church of Jesus Christ of Latter-day Saints in Toronto, Canada.

Upon returning, he completed his bachelor’s degree in music at BYU.  He received his master’s degree at the University of Oregon where he had the opportunity to participate in a musical exchange program in Europe.

After graduation, he accepted a job teaching music and coaching basketball at South Ogden Junior High in Utah.  His dedication to the choral program and his students impacted many lives.  He seemed to know a former student everywhere he went.  He met the love of his life, Peggy Milligan, at South.  They were sealed for eternity on June 1, 1970, in the Salt Lake temple.

They made their home in Syracuse, where they raised their three sons Sam, Steven, and Scott.  Henry continued teaching math at Sunset Junior High.  He supported, coached, and led his sons by example.  He spent hours shooting hoops, kicking soccer balls around, and teaching his boys how to be good men.  He and Peggy were instrumental in helping all three sons attain the rank of Eagle Scout.  He was one of the hardest working men and he passed that virtue on to his sons.  He didn’t miss a single game, concert, or event of his boys.  He loved to garden.  Everyone in his neighborhood knew Henry’s flowers and yard.  He had summers off and spent that time working in the yard and spending time in the outdoors with his family.  They enjoyed many vacations and time in the mountains and lakes together.

He was well known for having an amazing voice.  He sang in the Utah Opera Company for years and has sung at countless meetings and funerals over the years.  He sang many duets with his kids and grandkids.  You could feel the power of his voice when he sang.  Peggy was always at his side accompanying him on the piano.  There are several songs that will serve as a lasting memory of him.

He had a strong testimony of the gospel of Jesus Christ and was an example to everyone that knew him.  He and Peggy were always looking for an opportunity to serve and help their friends, family, and neighbors.  They were able to serve missions in Salt Lake at Temple Square and in Nauvoo, Illinois.  They found great joy in using their musical talents to bless others on their missions and made life-long friendships that they will cherish forever.

Henry’s greatest joy was found spending time with his wife, children, and grandchildren.  He loved to make everyone laugh.  He was an avid BYU fan and loved the Utah Jazz.  To say he will be greatly missed is an understatement.

He was preceded in death by his parents, Harry and Olive Moffit; stepmother, Norma Moffit; and sister, Ada. He is survived by his wife, Peggy Moffit; his sons, Sam (Jaimee), Steven (Shannon), Scott (Kathy); 12 grandchildren; a great grandson (due in August); and his stepsisters, Cheryl (Lowell) Curtis, Julene Haworth, Kathy (Jerry) Wright, and Vera Jean Powell.

A very special thank you to Dr. Layne Barker, Jen, Stefanie, and Jon of Cascade Springs Hospice – all are angels on this earth.

Interment will be at Syracuse City Cemetery.

To view the funeral service virtually, join the Zoom meeting by clicking on this link:

To order memorial trees or send flowers to the family in memory of Henry Edward Moffit, please visit our flower store.