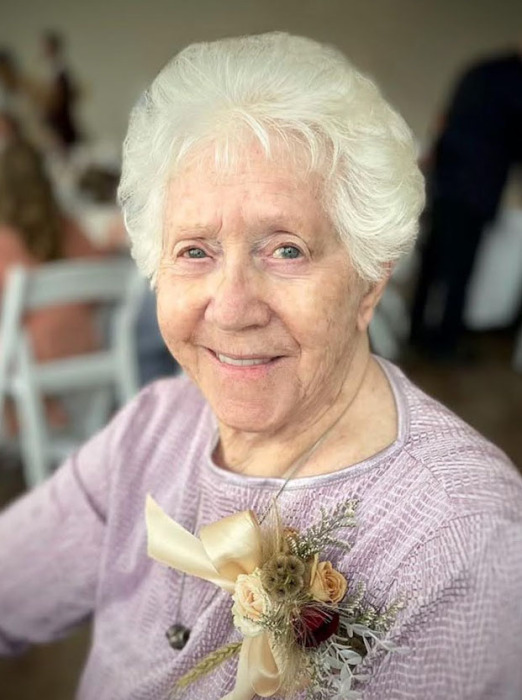 Gunborg (Giggi) Elizabeth Henriksson Madsen, our beloved mother, grandmother, great-grandmother passed away peacefully on Friday, January 14, 2022, at the age of 90 at Creekside Senior Living Center after a brief illness. Gunborg Elizabeth was born to Sigfrid and Karin Teresia Moller Henriksson on August 8, 1931 in Everöd, Kristianstad, Sweden. She was the youngest of their two daughters. She grew up in Malmö, Kristianstad, Sweden, and also spent many summer months and many a Christmas at her grandparent’s spacious home next to a river and forest in the beautiful countryside of Gärds Köpinge, Kristianstad, Sweden. Her older sister, Britten was her best friend growing up. In her youth and throughout her entire life, Gunborg was actively involved in many sports and loved being outdoors in nature. She also had a great love for music since her mother could play by ear nearly any song on their piano, and learned to dance from her father.

Gunborg attended and graduated from RealSkolan in Malmö; was very skilled and competed in gymnastics and was fluent in English. She joined the Church of Jesus Christ of Latter-day Saints at the age of 17 years on December 18, 1948. She then served a church mission to northern Sweden at age 19. Thereafter, she traveled throughout many European countries with her close friend, Inga on her way to visit Italy. In 1953 she emigrated to the United States and settled herself in Salt Lake City, Utah, and adopted the more easily pronounced nickname of “Giggi”. She found employment at the church’s Genealogical Society; was an assistant nurse for Dr. Reid S. Clegg; a travel agent for AAA; and much later in life, worked at Marie Callender’s bakery and restaurant.

Gunborg initially lived near the University of Utah campus and was involved in many social activities and dances with the single adults there. Her social life eventually led her to meet Kenneth Carl Madsen who then courted her for quite some time. They were married on April 10, 1961, in the Salt Lake City, Utah temple by the late apostle, Elder LeGrand Richards. Together Ken and Giggi raised four children primarily in Bountiful, Utah, and were blessed with 53 years of marriage before Ken’s passing in 2014.

A very pivotal and humbling moment in their lives was the stunning loss of their home along Stone Creek from the June runoff and destructive mudslides of 1983. They were simply overwhelmed by the outpouring of pure, Christian love and service from numerous people, both known and unknown, that was rendered to temporarily rehouse the family and during the house rebuilding process. Receiving such abundant, selfless service was a very difficult lesson to learn and it changed the remainder of their lives.

They both loved to travel, choosing destinations like Hawaii, Mexico, Alaska, many western coasts, national parks, and various metropolis locations in the United States. Gunborg enjoyed being among close friends, the endearing SFOEM Group, and her children while exploring many natural beauties and lakes in the west, especially camping, hiking, river rafting, snow skiing, boating, and water skiing. She absolutely loved being around water, where Jackson Lake, WY, and Bear Lake, UT were frequented often and held special places in her heart.

Gunborg was also known amongst her family and many friends as a gifted, engaging, and funny storyteller who was very proud of her Swedish heritage and humor. A string of laughter was always involved whenever her friends would visit. Christmastime was a special and blessed occasion for her family where Swedish traditions involved a mild smorgasbord, the Sankta Lucia with a crown of candles on the head, and joyous music while dancing around the Christmas tree. This tradition was shared in abundance with family and friends and handed down to her posterity. These are precious, treasured forever memories never to be forgotten.

As a faithful member of the church, Gunborg served in many callings: a counselor in the Primary and Relief Society presidencies, Cub Scout den leader, sports director for the Young Women, Primary teacher, temple ordinance worker in the Bountiful temple, and served a mission with her husband in the Columbus Ohio Mission. Above all, her favorite calling was Mother, Grandmother, and Great-Grandmother. Her unwavering testimony of the restored gospel of Jesus Christ, the Plan of Salvation, and faithfulness to its principles was an enduring guiding light in her life and to all her family members.

Gunborg’s family wishes to express their sincere gratitude for the kind and loving residents, staff, and the many caregivers at Creekside Senior Living Center during her residency there, with special recognition and deep appreciation to the dedicated and caring nurses of Renew Home Health•Hospice. There are indeed angels among us.

Services will be live-streamed by scrolling to the bottom of this obituary page.

To order memorial trees or send flowers to the family in memory of Gunborg Madsen, please visit our flower store.