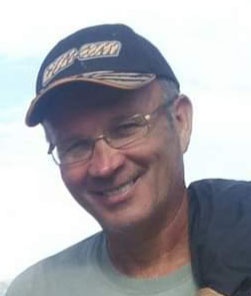 Gregory Lew Wright, 66, passed away riding his bike down the trail near his home on Friday, April 29, 2022. He’d just had his nightly visit with his sweetheart, Julie, at her grave; they were reunited shortly afterward. He was born November 10, 1955, in Ogden, Utah. He was the second of five children of Lew and Carol Wright.

Greg grew up in Wilson playing basketball, baseball, and football and helped on his family farm raising cows, working in the garden, and hauling hay for neighbors. He learned to play the piano at eight years old. He played throughout his life for his family and at various church functions whenever asked. "O Holy Night" was his kids' favorite; he played it every year at Christmastime for them.

Greg graduated from Weber High School in 1974. He then served in the Rapid City, South Dakota mission serving the Sioux people. After his mission, he married Mary Linda Campbell and they had five children together. They later divorced. He was active with Farr West City serving on the Planning Commission and volunteering on the 4th of July fireworks team for numerous years. He worked various construction jobs including owning his own company, Wrightway Siding. He also attended Weber State University, having just one more class needed to complete his bachelor’s degree in Construction Management. He was very handy and could fix just about anything around the house. He was working as a Construction Project Superintendent for Rio Vista Management at the time of his passing.

Greg married Julie Ann Steadman in 2007 in Milwaukee, Oregon. They enjoyed traveling together, working around their houses (always wearing his camo crocs), and hosting family parties with all the kids and grandkids. They held many callings together in their various wards including Trek Leaders and Scout Masters. He currently worked in the Ogden Temple on Thursday evenings, sneaking candy to the other temple workers throughout the sessions.

Greg was passionate about the outdoors and enjoyed spending as much time outside as possible. He loved adventure and was often exploring new places with his wife, Julie, riding four wheelers, camping, fishing or hunting with his son, Jared. He was quite the jokester; he loved playing pranks on anyone around him and would take any opportunity to do so. He was an active member of The Church of Jesus Christ of Latter-day Saints, holding many callings including: Young Men’s President, Elder’s Quorum President, Bishopric Counselor, and Scout Master.

Greg was preceded in death by his wife, Julie and his parents, Lew and Carol Wright.

To order memorial trees or send flowers to the family in memory of Gregory Lew Wright, please visit our flower store.