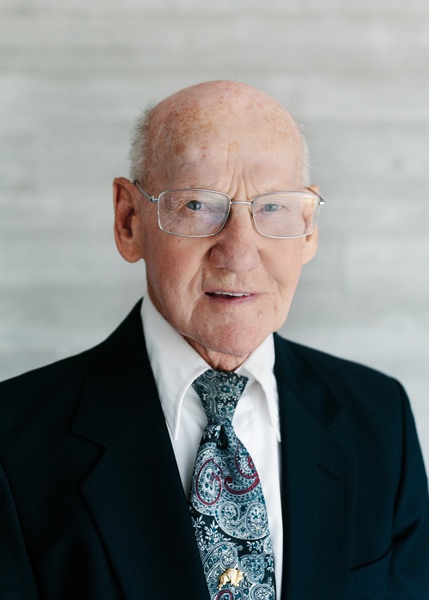 RIVERDALE–Glen Edward Talbot, at the age of 93, passed away on Thursday, June 23, 2022 having lived a full life. He passed away just as he hoped to: in his home, in his workshop. He was born November 24, 1928 in Lynndyl, Utah to Edward Clifford and Martha Ann Peters Talbot. The family later moved to Ogden, where Glen grew up and spent most of his life.

Glen married JoAnn Beasley on June 12, 1950 in Ogden, Utah and were blessed with three beautiful girls. Later they were all sealed together for time and eternity in the Salt Lake LDS Temple on June 18, 1971.

Glen was drafted for the Korean War and was attached to the 714th Railroad Operating Battalion. Although his unit was not deployed, he was ready to serve his country and was honorably discharged.

Using his G.I. Bill, Glen graduated from Weber State College with a Machinist’s’ Associate Degree in 1956. Simultaneously, he worked full time at the railroad where he received his four year Carman Car Repair Apprenticeship. He worked for the Southern Pacific Railroad most of his life, which took him and his family to Klamath Falls, Oregon (1964), then Carlin, Nevada (1967), and finally back to Ogden (1972). Glen retired at the young age of 59, as the General Manager of the S.P.’s Ogden Railroad yards. He will be remembered for his hard work and integrity.

Anyone who knew Glen, knew he enjoyed guns. He built many different ones during his life, (mostly muzzle-loaders) but will mostly be remembered for the beautiful (and accurate!) cannons that he shared with many school children, LDS ward members, family, and even LDS Seminary and Institute instructors.

Glen was a lifelong member of The Church of Jesus Christ of Latter-day Saints and was always willing to serve. He was a generous neighbor, constantly seeking to help those around him.

To order memorial trees or send flowers to the family in memory of Glen E Talbot, please visit our flower store.