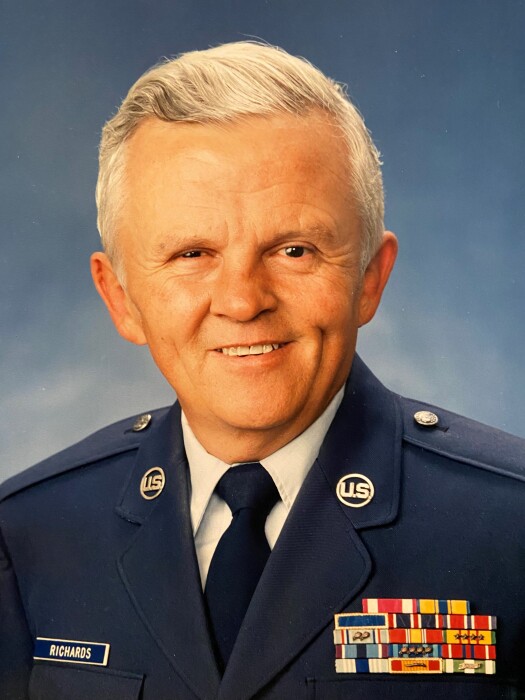 Gerald “Jerry” Edwin Richards, age 75, passed away peacefully on October 13th, 2021 at home, surrounded by his family. He was a loving husband, father, grandfather, brother, uncle and friend to many and will be missed by all.

He was born in Canton, OH on January 6, 1946, the fifth of six children born to Aaron and Mildred (Locy) Richards. Born and raised in Ohio he was a lifelong fan of The Ohio State University Buckeyes. Jerry graduated from Chaney High School in Youngstown, Ohio and upon his graduation in 1964, enlisted in the United States Air Force and attended basic training at Lackland AFB, San Antonio, TX.  His first assignment sent him to Castle AFB in California and subsequently to Vietnam (66-71), Minot AFB, ND (71-74), Tachikawa AB, Japan (74-77), Minot AFB (77-79), Yokota AB, Japan (79-83), Tinker AFB, OK (83-84), Ramstein AB, Germany (84-87) and Hill AFB, UT (87-90).  Jerry retired in 1990 at the rank of Master Sergeant after honorably serving his country for 26 years.

He is a proud Vietnam War Veteran who served on the Air Force Advisory Team. Because of his fluency in the Vietnamese Language, he taught English to the Vietnamese and also served as an interpreter for the Refugee Airlift as well as Operation Babylift in 1975.

After his first retirement, Jerry started a second career as a realtor.  He found his passion in helping people buy and sell their homes.  He enjoyed all the people he met and the friendships he developed with his Team One teammates.

Jerry had a heart for volunteering and helping others. He donated numerous hours and funds over the years in support of community activities.  He coached his children’s sports teams, was a Cub Master for 31 years with the Cub Scouts, funded community Easter Egg Hunts and Christmas Parties to name a few.  He was the number one supporter of the Davis High School’s Girl’s Basketball and Volleyball Teams from 2004 -2016.  He was there to cheer the volleyball team when they won the state championship in 2011.

In 2009, Jerry was diagnosed with CLL (Chronic Lymphocytic Leukemia), Type II Diabetes and COPD, all as a result of exposure to Agent Orange during his 5 years serving in Vietnam.  He fought a tough battle and was looking forward to the December birth of his first great grandchild but in the end, his fighting spirit wasn’t enough. Although we will miss him terribly, we know that he is free from the pain and suffering.

In lieu of flowers, it was Jerry’s wish that family and friends make a donation to The Vietnam Veterans Association and to continue to support and care for our military veterans.

The family wishes to express their gratitude and appreciation to the CNAs, nurses and doctors of Applegate HomeCare and Hospice for their love, care, compassion and support. They would also like to thank the Ogden and Salt Lake City Veterans Administration for providing Jerry with the essentials needed to continue living at home, as well as Dr. Jason Stinnett of Utah Cancer Specialists and Dr. Mike Kirkham of Tanner Clinic for their care over the years.

Interment, Lindquist’s Memorial Park at Layton where Military Honors will be accorded.

To order memorial trees or send flowers to the family in memory of Gerald "Jerry" Richards, please visit our flower store.