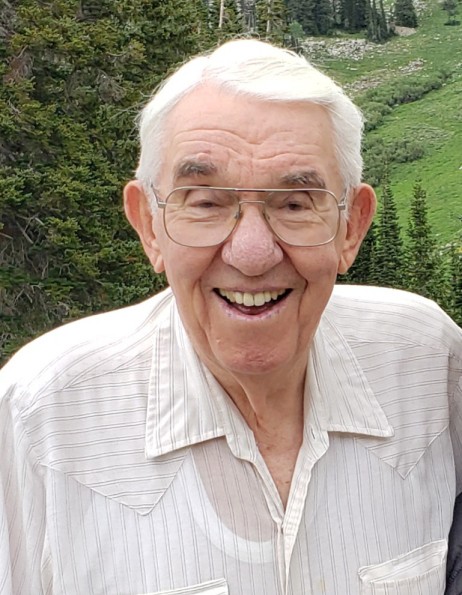 Gerald Carlisle Naylor was welcomed to his Heavenly home by all of his loved ones who were undoubtedly jumping for joy to reunite with him on September 24, 2021. He was blessed to make this transition in the most beautiful way, peacefully sleeping near his darling sweetheart of 70 years by his side.

What a difficult thing it is to come up with limited words to honor the beautiful life of Jerry Naylor. He lived a full, wonderful life that touched the lives of each and every human he came in contact with and no matter how we try, there are just not enough words to honor his life.

Jerry was born on August 27, 1932 in Salt Lake City to William T. and Twila G. Naylor. The Naylor family lived in the Salt Lake City area, spending the majority of his youth in the East Mill Creek area where he met the love of his life, and they started their love story there.

What do you say about his beautiful love story?  It’s impossible to put into words. Jerry married the love of his life, his Schätzli (Swiss for sweetheart), Cynthia Dona Grob on April 17, 1952 in the Salt Lake Temple, for time and all eternity. He loved her with all that he had and always made sure she was taken care of above all else. These last few years she has declined in health with Alzheimer’s and not a day went by that he didn’t sit with her, holding her hand all day long reassuring her she was his love. That someday all this will be behind them, living amongst the angels pain and disease free. He adored his beautiful bride and would have done anything to keep her safe and happy. Together they had five beautiful children and as a family created some beautiful memories most can only dream of. Over the last two and a half years, each of their children have taken one weekend a month to come and stay with their parents. They have each expressed what an amazing gift that was to have had that time with mom and dad. Jerry had many callings on his earthly journey first and foremost was to his family. He worked hard and was so dedicated in making sure they had all they needed and then some. In his words “The most important thing is family, if you can keep your family together; that is everything.”  He loved to travel, and he taught his family the value of precious moments living life to the fullest that has passed on to his children and grandchildren. They created many family traditions that involved both his and his sweetheart’s family together, needless to say the gatherings were huge, but the love was even bigger. There was never a shortage of food and laughter. Many of the traditions were spent at their summer home in Eden, “The Farm”, where he found much joy and solace. It will not be the same without Ol Jer doing his warm welcome full of laughter, tears and his opening prayers. He was always so proud to be the patriarch of his amazing multi-generational family.

Jerry proudly served in the US Navy from 1952 until 1960 where he was released with an honorable discharge.  His ship was stationed in the active area of the Korean War. He was so very proud of his service to his country and to tell people he was a veteran.

Jerry’s career was with Northern Utah Glass which became Valley Glass, he and his Dad created a family empire that has now been passed on to his beloved son Marc. A very proud moment for him. At one point they owned and operated 28 shops! If you knew Jerry, you knew he was the world’s proudest business owner and window salesman out there!! Valley Glass has been going strong for 65 years, an accomplishment that had Jerry beaming with pride until the day he passed. While building Valley Glass to success, he developed many cherished lifelong friendships with vendors and insurance agents.

Everywhere Jerry went, he greeted you with a “Well howdy doooteee you ol dude” or a “There she is” or “Hey pard” (if he didn’t remember your name; he would usually come up with your own special nickname)! His face would always beam with a smile that was so contagious, it could cheer up even the saddest of hearts. If you ever needed a thing you were answered with a smile and a “You bet”!  Jerry was the world's greatest storyteller, regardless of how many times you've heard the stories before, it was always a treat and a good laugh to hear it again. All the while after leaving him, you would think to yourself is that even true?! Whenever you had a story to share with him, his famous words were “How bout that”!  If you ever had a disagreement; his words with a furrowed brow were “Oh phooey” and no matter the situation he always parted ways with you with a “Take care” or a “Hang in there”.  We will forever cherish the little things that made our Ol Jer so unique and so very special.

He loved to be in the outdoors, as an avid skier, golfer, fisherman, adventurer, gardener and farmer. Over the years, he raised sheep, lots of them. He also raised cattle and even had a few horses. Jerry was always willing to share the fruits of his labor with his family, friends and neighbors.

Jerry looked forward to the Ogden Pioneer Days Rodeo where he would volunteer for decades. During the rodeo, you could always find him in the same seat up on the northwest top of the stairs enjoying it all. It was so special to him and created many treasured memories with his family. He was a proud part of the SLC 2000 Olympic Winter Games and wore his coat proudly up until this last winter.

Jerry loved his community and served on multiple councils including, Pleasant View City Council, the Ogden Rotary Club, McKay Dee Hospital Foundation and many BNI groups. He and his sweetheart were just honored to be the Pleasant View City Grand Marshalls in this year’s Founders Day Celebration, he was so humbled to be a part of this and grinned from ear to ear when in the parade!

He was a devout man of God with a strong and unwavering testimony of his Savior and the plan of forever families. He was a missionary each and every day spreading the love he had of his Father in Heaven and His son Jesus Christ. He wanted nothing more than to see all those he loved to experience the same joy he found within The Church of Jesus Christ of Latter-day Saints. Jerry and Cynthia served a full time LDS Mission in the Washington DC Temple Visitors Center. He has served in numerous church callings, but the ones he treasured most were his many temple callings for the last 50 plus years. The last one he took great pride in was his calling as a sealer in the Ogden Temple. This position was called to him by President Thomas S. Monson, which he was very honored and humbled by. Jerry also had a special love for family history, another thing he could go on and on about.

Jerry had a special way of turning a stranger into a great friend within a matter of minutes EVERYWHERE he went.

We could go on and on forever about our Grandpa, he is so very loved.

Jerry is survived by his dearest love, Cynthia Naylor; his children, Debbie-deceased, (Douglas) Smith, Marc (Linda) Naylor, Shauna (Scott) Rhoads, Garth (Pam) Naylor and Heather Kirby. He is also survived by 20 grandchildren, 30 great-grandchildren and 4 great-great-grandchildren; his beloved sister, Joan (Wayne) Neff…as well many many other family, friends and loved ones.

He was preceded in death by his parents, William T. and Twila Naylor; his in-laws, Charlie and Margaret Grob; his two older brothers, Billy and Kenneth; daughter, Debbie Jo; grandsons, McKell, Justin, Derek and Garrett; a nephew, Dallas and many dear friends.

We will miss you more than words and we look forward to seeing you again… in the meantime we know you are near, watching over us, but especially your sweetheart who will be lost without you by her side.

Services will be livestreamed and available by scrolling to the bottom of Jerry’s obituary.

To order memorial trees or send flowers to the family in memory of Gerald Naylor, please visit our flower store.