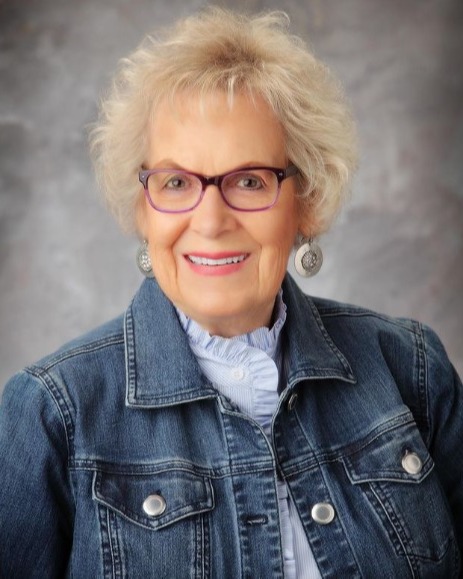 Gayle’dean Blair Bradford, wonderful wife, mom, grandma, great-grandma, and great-great-grandma, passed away in her sleep early in the morning on Christmas Eve, December 24th, 2022, at the age of 90 in Layton, UT. Gayle returned to her heavenly home, her eternal sweetheart, Dale H Bradford, and her parents, Bob and Leona, her brother, Vaughn Blair, and her sister, Carma Karren, who just passed away a few days prior to Gayle’s passing.

Gayle was born in Lewiston, UT, January 19th, 1932. She loved her childhood with many fond memories of her parents, older sister, and little brother. They grew up on a half-acre lot in Lewiston with horses, cows, pigs, and more. She loved animals. She especially grew to love horses, learning to ride and herd cows from her dad. She became the Lewiston and Cache Valley rodeo queen with her American Saddler horse, O’Dare. Over the years she shared her love for horses with her own children, owning multiple horses, participating in 4H Clubs and many rodeos.

Growing up, Gayle would help with cleaning and other odd jobs around their home. She was a natural organizer and became an immaculate housekeeper and the ultimate homemaker! As a girl, she also contributed by thinning and topping sugar beets and helping her dad trample hay. Her mom became a beauty operator in their home and taught Gayle how to do hair. Gayle would stand on the back porch cutting everyone’s hair for hours – a skill that she would use for the rest of her life. She later attended beauty school to further develop her trade.

Gayle started taking piano lessons at a young age and would practice an hour every morning after her dad stoked the stove. She became an accomplished classical pianist, playing solos for school, church, and community events. She took lessons from a college professor in Logan and began teaching lessons in student’s homes. She was thrilled as a teenager when her bishop called her to play the organ for church meetings. Gayle also played the clarinet in the Jr. High and High School pep and marching bands. She shared her talent and love for music with her family and many others throughout her life.

Gayle met a young man from Box Elder County who came to Lewiston to build homes. Sparks flew! She would strategically ride her horse past his construction sites to get his attention, and it worked! She and Dale eventually became eternal sweethearts, and married in the Logan Utah Temple on July 14, 1950. She said, “I met Dale, and then life began!”

They had their first child, Sindy, in 1952. Dale had joined the Air Force and ended up being stationed in Guam for two years where Gayle and Sindy eventually joined him. While on the island Gayle worked at a clothing store, taking measurements for the military personnel to have their uniforms made.

Their little family was then transferred to Merced, CA, and then back to Utah where Gayle and Sindy moved back in with her parents while Dale was stationed in Japan. During this time Gayle took a job working as an operator for the Telephone Company.

Gayle loved working in her basement hair salon every Thursday and Friday from 6am to 6pm. Her weekly clientele loved her. For a while she also enjoyed working alongside her daughter, Sindy, at “Studio 2126” hair salon in Bountiful. And she was always on-call for family and all the neighbor kids who needed a last-minute haircut or perm. Through her salon, she always had cash on hand and would generously share with the kids for miscellaneous needs.

She shared her love for music with the family. Piano lessons were a requirement for the kids, and Christmas caroling became a favorite family tradition. She sang in a double quartet called ‘The Notable’s, performing in church services and church and community events throughout Northern Utah. They even provided the entertainment for an Osmond family Christmas party one year. She also sang live on the Eugene Jelesnik Talent Showcase TV show. Gayle wrote and/or directed many a roadshows, Founders Day programs, choir programs, and miscellaneous productions. She served as a church congregational chorister, or organist for decades bringing the joy of music to many.

Gayle was an active member of The Church of Jesus Christ of Latter-day Saints and loved serving in the church. She served in the primary and as an organist, choir director, chorister and music specialist, relief society president, and with Dale as ward activities specialists, throwing many memorable church parties. Together, they did a book review/production of Charlie’s Monument in many wards and stakes throughout the state. They also sang together at various functions, doing programs with their karaoke machine for countless church and community groups.

In 1998, Gayle and Dale moved to sunny St. George to start a new chapter of their life. They always enjoyed having their children and their families come stay in their beautiful home.  They made many new friends and became quite the social bugs and entertainers. They loved serving together for years in the St. George temple. They were especially thrilled to receive a fulltime mission call to serve in Nauvoo, IL, to help open the new Nauvoo Temple and train new temple workers. It was a highlight of their life and church service.

As their final relocation together, they moved to Fairfield Village, a senior living facility in Layton, UT, in 2017, where they again met and made friends with many wonderful people. Though inseparable in life, (they did everything together), Dale passed away on July 1, 2020. No doubt their reunion on Christmas Eve was a joyous one!

Gayle is survived by her children, Sindy (Mike) Grimlie, Teresa Hazen, Jeff (Shauna) Bradford, Brett Bradford. Gayle and Dale were extremely proud of their 17 grandchildren, 34 great-grandchildren, and 11 great-great-grandchildren. She will always be remembered as a loving wife and matriarch of five generations.

Thank you to Dale and Gayle's many amazing friends, to their caring Fairfield Village family, and to their amazing Encompass, Enhabit Home Health and Hospice, and Visiting Angels caregivers. And a special callout to Gayle’s personal caregivers, Kristen and Angie, who have lovingly cared for her the last five years . Everyone’s love and support has been a true blessing to Gayle and the entire family. Thank you for all you’ve done for mom and dad.

Facemasks are strongly encouraged for entry and exit into the Fairfield Village facility but may be removed during the service if desired. Park and enter on the north side (the Independent living side/four-story building) and go up the stairs just inside the entrance to the 2nd level. Elevators are also available. Due to limited parking at Fairfield Village, additional parking is available at the Lutheran church across the street (Southeast of Fairfield Village) with shuttle service to Fairfield Village.

Services will be live-streamed and may be viewed at www.lindquistmortuary.com by scrolling to the bottom of Gayle ‘dean’s obituary page.  The link will remain active on the site for later viewing.

To send flowers to the family, please have them delivered to the Lindquist’s Layton Mortuary, 1867 No. Fairfield Rd., Layton, Utah.

To order memorial trees or send flowers to the family in memory of Gayle'dean Blair Bradford, please visit our flower store.