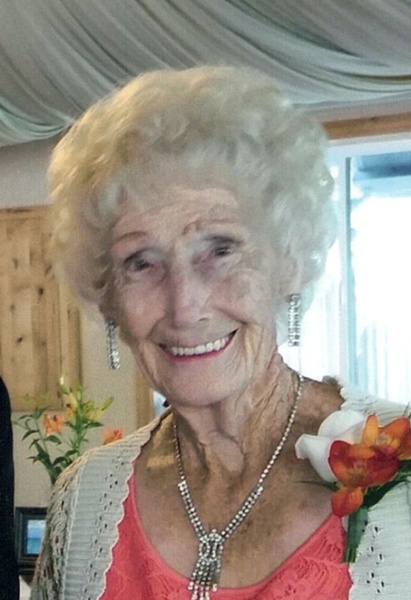 Our beloved wife, mother, grandmother and friend, Gayle Page Jarvis Christensen, passed away at her Bountiful home on January 1, 2022. She was 94 years old. It was 7 years to the day when she lost her second husband, Vern.

Gayle was born November 25, 1927, in Bountiful, Utah, to Willis Ethelett Page and Nellie Ray Brown. She was the youngest of 6 children by several years. Gayle's father died when she was 5 years old. She and her mother were mostly by themselves and shared a very close relationship. Some of her fondest memories were of time spent with her mother.

Gayle grew up in Woods Cross, Utah, where she made many cherished lifelong friends. She graduated from Davis High School in 1945. Gayle met a handsome, dark- haired man, Joseph Grant Jarvis, on a blind date arranged by mutual friends. They were married on March 20, 1947, and later sealed in the Salt Lake Temple.

Gayle and Joe began married life in Woods Cross, Utah, but spent the majority of there marriage in Bountiful, Utah. They were active members of the Church of Jesus Christ of Latter-day Saints and both served in many church callings. Joe passed away on January 24, 1981. She married Vern N. Christensen on January 27, 1990. He died on January 1, 2015.

Gayle was talented in numerous ways. After Joe died, golf became her passion. She spent many happy hours with friends and family. She didn’t hit an extremely long ball, but it was always right down the middle. She beat many exasperated long ball hitters because of her accuracy. Twice she was even able to make a hole in one.

Gayle loved all sports, but she especially loved the University of Utah football team. She attended most home games for many years. On her 90th birthday she was honored with a scoreboard tribute at halftime. She even got an autographed Utah helmet to mark the occasion.

She enjoyed traveling to at least one away game a year with various family members. One of her favorites was a trip to Notre Dame.

Gayle loved animals and children, and they loved her. She often donated to the Humane Society. She tended her son's dogs for years while he was at work, and she always had a treat for her neighbor’s dog.  She was absolutely giddy when she saw a deer.  She adored her great-grandchildren as well as the sweet neighborhood kids who would visit her.

Gayle and Vern took great pride in making their yard a showpiece.  They won several beautification awards from the city, and she continued to work in her yard until she became ill.

She loved to look her best and was thrilled when someone complimented her outfit.  She had a wonderful sense of style and enjoyed putting together different outfits.

Gayle was talented at dipping beautiful chocolates, creating ceramic dolls for her granddaughters and enjoyed square dancing.  She had a very sharp wit the seemed to come out of the blue and entertained her friends and family.

One of the most difficult and challenging things she ever did was to care for her oldest son, Scott, after he was diagnosed with MS.  She tended to his needs for years with patience, love and compassion until his passing March 18, 1997.  She was a shining example for us all.

We would like to thank the Ashby Hospice doctors and nurses for their outstanding service, as well as her dear neighbors for all they did for her and for us. Thank you to Sheri Robison, Janean, Lynette and especially Maggie for the tender love and care they provided during this difficult time.

Services will be live-streamed by scrolling to the bottom of Gayle's obituary page.

To order memorial trees or send flowers to the family in memory of Gayle Christensen, please visit our flower store.