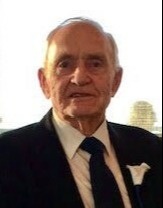 Garrick Wayne Fillmore passed away peacefully March 1, 2022, at his home in Taylorsville, Utah.

Born September 1, 1927 in Clark, Idaho, he was one of eight children born to Garrick William Fillmore and Sarah Lettie Tolley.  In November 1945, he joined the U.S. Army and served in World War II until being discharged in 1947.  Wayne was a life-long member of The Church of Jesus Christ of Latter-day Saints and served a two-year mission to the Western States Mission (USA) from 1948 to 1950.

He met his future wife, Fern, before leaving for the mission field.  His brother and one of Fern’s sisters were going out on a date, and Wayne asked if she had a sister.  Fern came along and they went on a double date.  He married Fern Wheeler on March 3, 1950, in the Idaho Falls LDS Temple.  Wayne and Fern, and later their children, lived in Idaho, Montana, California, Arizona, Alaska, and Utah.

As a member of The Church of Jesus Christ of Latter-day Saints, Wayne held numerous callings in the Church: scout leader, Sunday school teacher, a member of bishopric, and a devoted home teacher.  With his wonderful wife, Fern, he was able to serve two senior missions, one in South Carolina and one in Ireland.  He was an incredible example of love and service, and it showed in everything he and Fern did.

He is preceded in death by his loving wife Fern, parents Garrick and Sarah, daughter Marcia Leishman, grandson Scott Christensen, and three brothers and two sisters.    He is survived by two brothers, Ray and Max; daughters: Paula, Toni, and Tash; son, David; 27 grandchildren; more than 70 great-grandchildren; and one great-great grandchild and more on the way.

Together, Wayne and Fern have left behind an incredible legacy of love for their children, who have been able to pass that down to their own children and grandchildren.

To order memorial trees or send flowers to the family in memory of Wayne Fillmore, please visit our flower store.