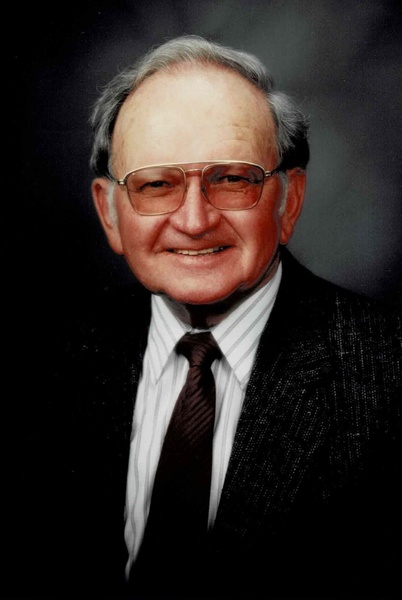 Our beloved husband, father, grandfather, and uncle Frank Skeen Blair passed away peacefully at home in Layton on May 9, 2022, at the age of 93. He was born in Ogden, Utah on July 2, 1928, to James Clifford and Charlotte Skeen Blair and grew up on a farm in nearby Marriott. He learned to work hard taking care of chickens, herding sheep, and delivering milk from a young age. He attended Marriott and Wilson Schools, Wahlquist Junior High, and Weber High School, where he participated in debate and drama in addition to playing basketball and football.

He was proud to have attended three of Utah’s (now) universities, Weber College, Brigham Young University, and the University of Utah, culminating in a doctorate in education from BYU. He cheered for all Utah collegiate sports teams, although he was first and foremost a Cougar who proudly flew his “Y” flag on game days. By both profession and vocation, he was an educator. He started his career teaching at Hopkins, Lewis, and Mountain View Elementary schools in Ogden and was later principal at Washington School and Bonneville Elementary. He also taught in the education department at Weber State College. He finished his career as director of vocational education for Ogden City School District and the Utah State Office of Education.

His most important students were his children, whom he taught to work and study hard, serve others, and develop a wide variety of talents. After “retiring” he was able to spend more time at home with his children while they were still young; he also had a second career in real estate development, including building Mulligan’s Golf with his brother and nephew on their old family farm. In all that he did, he was innovative and never let the way things had been done prevent him from suggesting something better.

Frank met his beloved wife Bonnie, also an educator, through their mutual professional connections. They were married on June 12, 1979, in the Ogden Utah Temple and would have celebrated their 43rd anniversary in June. They are the proud parents of four children and nine grandchildren, who were always Frank’s priority and his pride and joy.  He was their greatest fan, attending and coaching numerous sporting and artistic events to support them, and in turn he encouraged them to focus on their own families.

Frank was a devoted member of The Church of Jesus Christ of Latter-day Saints throughout his life. One of his most formative experiences was serving as a missionary “without purse and scrip” in the California Mission under President Oscar W. McConkie. He was later called to serve with Bonnie in the California Oakland-San Francisco Mission, where they particularly enjoyed teaching English to the Chinese community. Among his other service in the Church, he was bishop of the Layton 29th Ward, high councilor, stake Young Men’s president, stake executive secretary, and high priest group leader.  He also loved being in the temple, often attending multiple sessions in a day. He enjoyed sharing his skill as a teacher and spent many years in Sunday School and teacher improvement callings. Whatever he was called to do in the Church, he adopted with enthusiasm, including touting the importance of the Ensign magazine as ward magazine representative. He befriended many with his humor and smile, and he was famous for sharing the bounty of his large garden with his neighbors and those in need, such as the Ogden Rescue Mission.

He was a patriot in the best sense of the word, having served on active duty in the U.S. Navy during the Korean War aboard LST 975. One of his shipboard experiences as a young ensign was shared in the Church’s 2018 Annual General Conference as an example of how to “Take the Holy Spirit as Your Guide.” He spent another 30 years in the Navy Reserve, including serving as commanding officer of the Surface Division in Ogden, retiring with the rank of commander.

He constantly served in the community, including as a member of the Davis County Library board, chair of the Weber County Library board, vice-chair of the Davis County Mental Health board, and a member of the Ogden Rotary Club. For 69 years, he was a proud and regular blood donor to the American Red Cross and donated in memory of the casualties at Iwo Jima, where he spent part of his naval service just a decade after the WWII battle there. He was also active in politics, serving as a member of the state party central committee and party chair for the 1st Congressional District and Weber County. He helped recruit many candidates at all levels of government, often took his children out to canvass door-to-door or put up campaign signs, and frequently hosted political cottage and caucus meetings at his home.

Frank is survived by his wife Bonnie Muirbrook Blair; his four children, Clifford (Margo) Blair, Preston (Rachel) Blair, Brooke (Aaron) Cope, and Amber (Isaac) Blackhurst; and grandchildren Isaac, Alexander, Margaret, Charlotte, Joshua, Enoch, Austin, and Eve Anne. He is also survived by many of his brothers-in-law, sisters-in-law, nephews and nieces, and their families. He was preceded in death by his parents; his beloved siblings Elizabeth Murray Jacobsen, James C. Blair, Jr., and William S. Blair; and grandson Caleb Cope.

To honor Frank, donations may be made in his memory to the Missionary Fund of The Church of Jesus Christ of Latter-day Saints or the American Red Cross.

Interment with military honors will be accorded at  Ogden City Cemetery.

Services will be live-streamed and may be viewed at www.lindquistmortuary.com by scrolling to the bottom of Frank’s obituary page.

To order memorial trees or send flowers to the family in memory of Frank Skeen Blair, please visit our flower store.