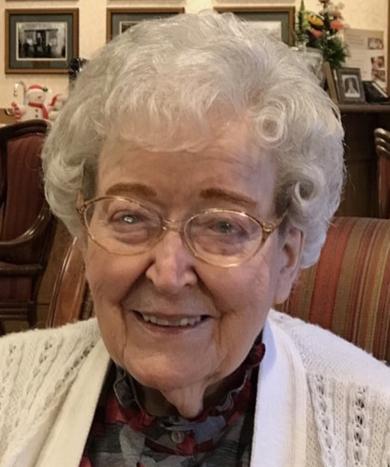 Faye Longhurst Ball passed away on April 5, 2022 at Sunrise of Sandy from a short illness.   She had just celebrated her 98th birthday with family and friends.  She was born on March 29, 1924 in Logan, UT to George Leonard and Ruth Annie Mason Longhurst.   She joined the family as the fourth daughter and had two younger brothers.  The family moved to Woodruff when Faye was one year old.  Faye, attended grade school in Woodruff and high school in Randolph, Utah.  As the youngest of the daughters, Faye helped her father on the farm, and learned to ride horses, milk the cows, and other farm duties.

In Faye’s junior year of High School, her mother took ill and died.  She took care of her dad and brothers, helped with the farm, and attended her senior year of high school.  After high school she moved to Ogden and got a job.  She worked for the Defense Depot since World War II was in full force.  But she really found her career when she learned the military were recruiting for young women to go through nurses training with the cadet program.  She applied and loved being a Registered Nurse.  She fulfilled her duty with the military and then she went into public health.   Ultimately she found her specialty when she became a corporate nurse.   She worked for American Can Company as their company nurse.  Faye worked for her nurse friends and several doctors part-time throughout her life.  She finished her career working for the Union Pacific Railroad hospital association as their nurse, working until she was 70.

She met Neal Ball at a church social on January 8, 1946, during her final year of nursing school.  She married Neal on August 8, 1946.  Their marriage was solemnized in the Salt Lake Temple on October 17, 1950.  They had their first daughter, Raelene, after five years of worrying about never being able to have children.  Three years later Cheryl joined the family.

She enjoyed her membership in the Daughters of the Utah Pioneers for over 50 years.  She

was an active member of The Church of Jesus Christ of Latter-day Saints.  She served with her eternal companion as temple ordinance workers in the Ogden Temple for 25 years from 1986 until 2011.

Faye loved her family and friends and was deeply loved in return.  She was always anxious to know about everyone she met, and remembered the tiniest details they shared.  She was extremely proud of her family and loved to share their accomplishments with everyone.   We will all miss her support and love.

The family would like to thank the staff and her friends at Sunrise of Sandy who loved and cared for her as well as the nurses and doctors who treated her through her illness.

To order memorial trees or send flowers to the family in memory of Faye Longhurst Ball, please visit our flower store.