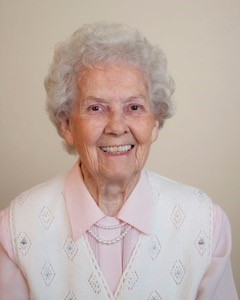 Surrounded by her family, Erma Patrick Whitesides, 98, of Layton, Utah, passed away April 9, 2022 at her home.

Erma was born on January 8, 1924, the second of twin girls born to Lura Ann White and John Hulet Patrick.  She was sixth in a family of nine children.

Erma spent her youth in Springville enjoying life with her parents and siblings.  Growing up, the family never owned a vehicle.  They walked or rode a wagon wherever they went.

To earn money Erma picked strawberries, cherries, green beans, cleaned eggs, did housecleaning, babysitting, ironing and worked as a car hop.  The Patrick Family raised a large garden.  They bottled fruit and vegetables, ate pork from the pigs their father raised, dried apples and made butter to sell.  Although they were poor, they always had enough to eat.

Erma graduated from Springville High in 1942.  She played on the Kolob Lumber girls softball team.  Her team was successful and won the Utah State Softball Championship in 1940 and 1941.  Erma always played catcher.  Her twin, Elma played 2nd base.

During her senior year of high school, Pearl Harbor was bombed, and World War II began for the United States.  Erma graduated from high school early to participate in the war effort.  She moved to Layton and began work at Hill Air Force Base and in the evenings, she worked the fountain at Kowley Drug.

Erma married Evan A Whitesides January 17, 1944 in the Salt Lake Temple.  In 1944, Evan was drafted into the Army, and they moved to Neosho, Missouri, and later to Long Branch, New Jersey.  Evan was discharged from the Army in 1946 and the family moved to Verdeland Park in Layton.  During their lives, they built houses on Hill Field Road, Gordon Avenue, and Cherry Lane in Layton.

Erma was devoted to her parents.  After the death of their mother, she and other family members dedicated years to the care of their father who died at 104 years of age.

Erma was an active member of the Church of Jesus Christ of Latter-day Saints.  She served in the Primary, Young Women’s organization, Relief Society, as a Social Services Volunteer and as an ordinance worker in the Ogden Temple.

Erma will be remembered for her stalwart devotion to the gospel of Jesus Christ, her willingness to follow the prophet and her untiring work ethic.  Regardless of the changing title, she was a model Relief Society Teacher, Visiting Teacher, or Ministering Sister.  Many of those she contacted and asked to come to church listened to her invitation and attended.  She had a missionary heart.

Erma loved sports.  She never was a golfer but watched part of the Masters Tournament on the day she died.  Any sport at any time held her interest.

She was preceded in death by her husband, parents, all her siblings, and her son Ross who died at age four.

She and her family want to thank her neighbors, friends, ministering brother and sister (Scott and Jana Lawrence) and medical professionals who have dedicated long-term support, provided advice, and demonstrated love for her.

Services will be live-streamed and may be viewed at www.lindquistmortuary.com by scrolling to the bottom of Erma's obituary page.

Erma loved things that grow, especially plants and flowers.  She had an extraordinary green thumb and was forever expanding her flower beds and garden site.  She eventually earned the nickname “sod buster” among the family.

To order memorial trees or send flowers to the family in memory of Erma Patrick Whitesides, please visit our flower store.
Send a Sympathy Card