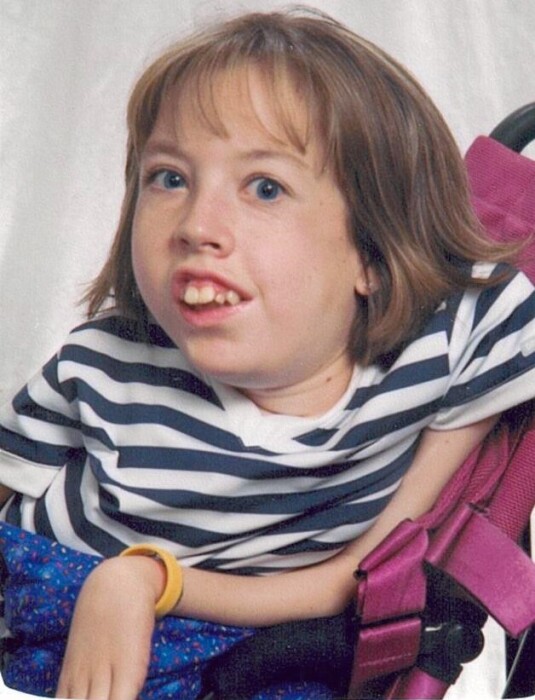 Elsha Stockseth “The Biggest, Little U2 Fan in the World”

Elsha Stockseth Aug. 28, 1983---Nov. 18, 2021.  South Weber, Utah, passed away at the age of 38 due to complications from Muscular Dystrophy in St. George, Utah.  She was born in Ogden, Utah to Joel Davis Stockseth and Shanna (Facer) Stockseth.

She developed a talent for art while attending Sunset Junior High School and had her work displayed at a show in an Ogden Library.  She was also a Sterling Scholar in art when she attended Northridge High School graduating with a 4.0 GPA.  After high school she continued her education at the Utah Career College where she learned how to use Adobe Photoshop.  Her arms became too weak to draw and paint so she relied on computer programs to continue making beautiful works of art.  Elsha wanted to help orphans and disadvantaged children, so she created her “eArt” Christmas cards which she sold to people around the world.  The proceeds helped her sponsor a young boy, Michael, in Kenya to pay for his schooling.  With the help of a friend, she developed her own website (eartbyelsha.com) to tell her story and to sell her cards.  She also sent presents and her precious Beanie Baby collection to orphanages to South Africa and South America.  Her face would light up when she got pictures back from those kind souls that distributed the gifts to the children.

One of her teachers in high school told her about a band, U2, whose lyrics touched his soul.  Elsha started listening to their songs and reading the lyrics.  Her parents took Elsha to her first U2 concert in 2005 which started her on an amazing journey and close bond with the band, meeting them multiple times.  She treasured her time with them especially getting personalized notes and drawings from Bono, the lead singer.  While she was struggling to live in the Intensive Care Unit in the St. George Regional Hospital, she received a video message from Bono.  Even though she was losing her ability to speak and was struggling to breathe with the Bipap mask on, we could see the joy in her eyes and a big smile that the message brought to her.  Other members of U2 also reached out to her which made her so happy during her difficult last few days.  Her favorite U2 songs were “Walk On” because to her it meant to keep trying no matter what obstacles crossed her way.  Another song, “Miracle Drug” had a very special message in it for her: “There is no failure here sweetheart, just when you quit.”  She never quit.

Elsha saw a random Facebook post about someone trying to form a team for a Ragnar (trail running) race.  Elsha jokingly responded saying she would like to be part of the team.  That began her journey with the running community.  People stared pushing her in 5K, 10K, half marathons, marathons and even a few Triathlons.  She loved going to the races and interacting with all of the athletes.  The freedom she felt while being pushed in races was incredibly overwhelming.  She would describe each race to her parents afterwards with the biggest smile on her face.  We will be forever grateful to those who helped her run.

She was preceded in death by her grandparents; Joseph and Emma Loa Stockseth, Joan Facer, and Lamar Facer and her cat Simba.

To order memorial trees or send flowers to the family in memory of Elsha Stockseth, please visit our flower store.