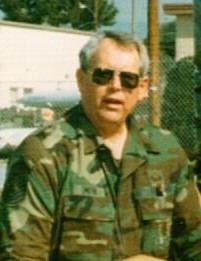 Today, we have the honor of celebrating the life of Edward Dale Smith, better known to some as Dad, Honey, Brother, Uncle Dale, and Grandpa or “Papa.”  Born January 26, 1944, the son of Edward Earl and Allie Jean, brother of Paul Dean and Douglas, husband to Pauline, father of Michael, Michelle, Gene, and Douglas, and grandfather of 10, great-grandfather of 10, and friend to all who met him.

We are here today to remember the life and legacy he leaves on earth. It was a simple life, never complex and always with good, honest intentions. We could stand here for the better part of the day and reminisce about all the stories Dale was either part of or he told, and for those who knew him, you understand how long those stories could be.

We’re here to remember the person Dale was and what he has done for everyone he met.

Dale was above all a man of true patriotism. His love for the country was truly unmatched. He was a Vietnam Veteran, and a retired Chief Master Sergeant, in the United States Air Force. He worked at Hill Air Force Base in the 419th TFW until his retirement. He had the ability to have a witty comeback for almost any conversation, something that he definitely passed on to everyone in the family. Family man is a term not appreciated nearly enough these days. Today, there is more emphasis put on who we are and what we accomplish. Dale though, was the epitome of how great and unselfish it is to put those in your family first. He never asked for much. He drove plain, simple vehicles, lived in a modest home, and never took anything in life for granted. He put everyone in his family first. He liked to tease and say names like dipstick, dingleberry, dingle dorfus, putts-a-rolly, and chingadarro.

Kyle said he carried his comb in his back pocket to fix the few feathers he had left on his head.

We have heard the story a hundred times about Dad, Doug and Gene’s cleaning business (Fast Eddie’s Cleaning Service). The only customer they had was the bowling alley in Roy, but they never let them down. Not one time. He was happy with the lessons that they learned and how hard Gene and Doug worked. Dale, was of course, a very driven person and had a work ethic and drive that he was very modest about. He loved to go deer hunting, liked working on his own cars, and was a great do it yourselfer. He loved the Star Trek Series and even got to play Mr. Scott on the actual Star Trek set. Some say it’s what you leave on this earth that shows what you did with your life.

What Dale was able to help us see is it is more important to grow old with style and dignity and give everything you can to the people you love.

Dale would likely state how difficult it was in his golden years; sore back, hip and knees. In fact, Pauline said he had more ooh’s and ouche’s and ahh’s than anyone else she knows!

Yes that is a bold statement, but you can bet your last dollar that every word is true.

The people that make the biggest impact in the world are people like Dale – honest, truthful, and putting the needs of others first.

There is one thing for sure – Dale would always have your back.

To order memorial trees or send flowers to the family in memory of Edward Smith, please visit our flower store.